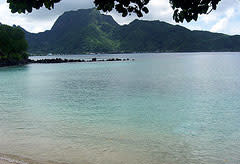 President Bush has proposed protecting vast swaths of marine territory in the South Pacific from commercial fishing and offshore drilling, in a move that some environmentalists have said could earn him a legacy as the "Teddy Roosevelt of the seas." This week, Bush is expected to ask his Cabinet for comments on conservation proposals for marine ecosystems around the Northern Mariana islands, the Line Islands, and American Samoa. While the Bush administration's environmental record has generally received harsh criticism from environmentalists, these proposals are being seen as a cause for celebration.

"We have every expectation that the president will move forward on protecting these places sometime in the fall," said Diane Regas, ocean program director at Environmental Defense Fund. "Today, we put the champagne on ice, and we will pop it open." Two years ago, the president made a huge swath of the Northwestern Hawaiian Islands a national monument, barring fishing, oil and gas extraction and tourism from its waters and coral reefs. The area is the single largest conservation area on the planet [AP].

The new areas suggested for protection include the deepest place on the Earth's surface, the 36,000-foot-deep Marianas Trench. The waters around the three island chains are rich in biodiversity, and are home to endangered sea turtles, coral reefs, and giant coconut crabs.

"These vast Pacific areas are nearly three times the size of Texas," said Elliott Norse, founder and President of Marine Conservation Biology Institute. "Countless seabirds, dolphins, fishes, corals and tiny things as yet undiscovered could survive as a result, free of the threats that are eliminating them elsewhere" [AP].

invited a small number of ocean advocates to an unusual, closed-door meeting to discuss the idea. The White House asked them to help identify potential reserves in waters within the United States' "exclusive economic zone," which extends 200 nautical miles out from the mainland and U.S.-owned islands around the world [NPR News].

President Bush can use the 1906 Antiquities Act to designate the areas as "marine monuments," which would allow him to establish these conservation areas quickly, without congressional approval.

EnvironmentTo Fight Plastic Pollution, These Researchers Want Your Pictures of Beach Trash
Recommendations From Our Store