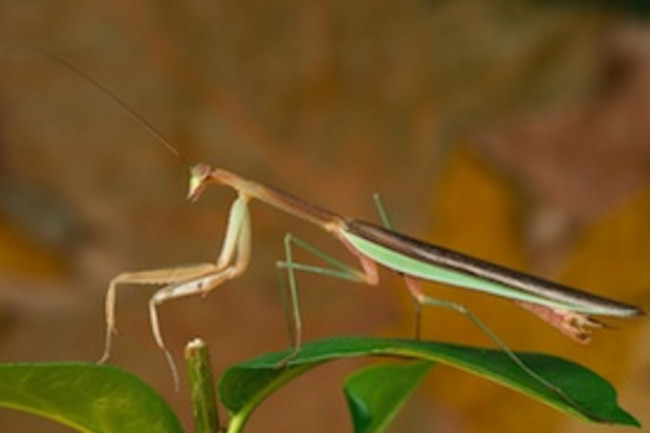 Praying mantises are really preying mantises, capable predators that capture and eat smaller insects. In the case of the larger, stronger female mantises, “smaller insects” also famously includes males of the same species. To mate with a potential predator, the males have to sneak up on their ladies, and a new study suggests

that they use the wind to help them out: males approached females more readily when a breeze shook the females' perch and disguised the males' motion. For mantises to mate, the male must creep up to the female and leap onto her back. If he fails, he will become a meal before he has a chance to reproduce. (Even if he succeeds, the female may bite his head off during copulation---but the decapitated male body is still able to continue mating and pass on his genes. So, mission accomplished?) Reaching the female undetected is thus an important male ability, and researchers tested how wind would affect it. They placed a male Chinese mantid

on a kudzu leaf, upwind from a female, and set up a fan to blow air at them. Once the male detected the female, the researchers timed how long it took him to make his move, and whether the female would detect and attack him. With the artificial wind shaking the leaf, the male tried to mate with the female more quickly than in windless conditions. Windy conditions also impaired the female’s ability to sense the male: she was less likely to attack him when the fan was on. This study doesn’t just demonstrate that wind helps mantises get it on. It also highlights the fact that conditions in the wild may have unexpected effects on the behavior of insects and other creatures. Without earlier field studies suggesting a link between wind and successful mating, would anyone have thought to test the connection in a lab? [via New Scientist