Polar Bears May Be Starving in the Barents Sea Area, But Thanks to Russia We Don't Know If It's Climate Change 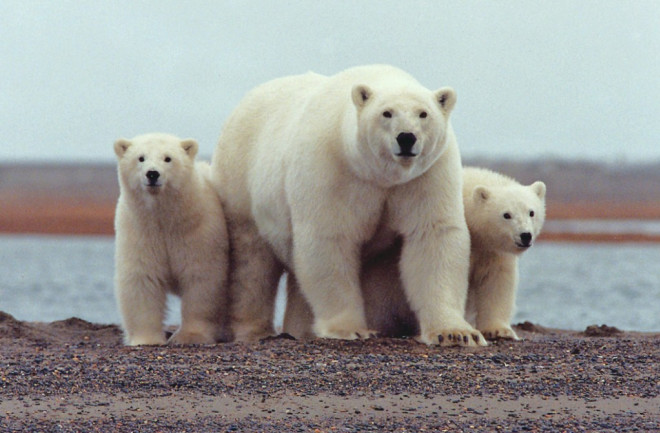 A polar bear keeps close to her young along the Beaufort Sea coast in the Arctic National Wildlife Refuge. (Source: Susanne Miller/U.S. Fish and Wildlife Service) Arctic sea ice has likely reached it's minimum geographic extent for 2015, coming in at fourth lowest in the satellite record and continuing a long-term downward trend, according to a just-released update from the National Snow and Ice Data Center. The news brings to mind a dramatic image of an emaciated polar bear in Svalbard, Norway that recently went viral. The bear quickly become a poster child for climate change. But posters and scientific evidence aren't quite the same thing. While it's true that shrinking sea ice in a warming Arctic is a plausible explanation for what happened to that poor polar bear, more science is needed to get a definitive answer on whether entire polar bear populations really are declining on Svalbard and Russia's Franz Josef Land in the Barents Sea region. That science was supposed to come from a joint Norwegian and Russian project to count polar bears last July — the first such census since 2004. But poor weather as well as intransigent Russian authorities have stood in the way of getting the counting done. In Svalbard, "it was foggy, so we did not see them," says Kim Holmén, International Director of The University Centre (UNIS) in Longyearbyen, whose researchers were going to participate in the census. And as the Barents Observer, an English language newspaper in Kirkenes, Norway, has reported, Russian authorities denied the Norwegians the necessary permission to enter Franz Josef Land. That was an important part of the project, because "the polar bear doesn’t obey the border," Holmén notes. The upshot: "We really don’t know how many polar bears are here." I heard from Holmén during a talk he gave at UNIS on Monday (Sept. 14, 2015) here in Longyearbyen, where I'm co-teaching a journalism course focusing on climate change. As it has turned out, the images of the starving polar bear, the claims made about connections to climate change, and the reality of what science can and cannot say about the issue, will make for an excellent case study for our students. My message to them: Don't jump to conclusions, be skeptical of unsubstantiated claims, and keep an open mind. So for now, we have a plausible explanation for how climate change could be causing polar bears to starve in the Barents Sea region, but we don't have definitive science on what's happening to the population overall. Kerstin Langenberger, the Norwegian photographer who made the spectacular image that went viral, offered this explanation — which does make sense: Shrinking sea ice in a warming Arctic has made it more difficult for female bears — which den on land — to get access to their favorite food source: seals. She says her own observations out in the wild strongly suggest that female polar bears here really are suffering. Langenberger noted in a Facebook post that the bear she photographed was a "mere skeleton, hurt on her front leg, possibly by a desperate attempt to hunt a walrus while she was stuck on land." It may be true that a photo is worth a thousand words. And Langenberger's impassioned call for action on climate change certainly was compelling. But neither a single photo, nor passionate arguments — nor even a thousand words — add up to definitive scientific evidence. That said, action on climate change should not depend on whether polar bear populations are declining in this or any other region. We've had abundant and convincing reasons to act for many years now. So let's hope that the discussion about climate change solutions does not founder on a debate about polar bears. And meanwhile, Arctic sea ice continues its long-term decline.