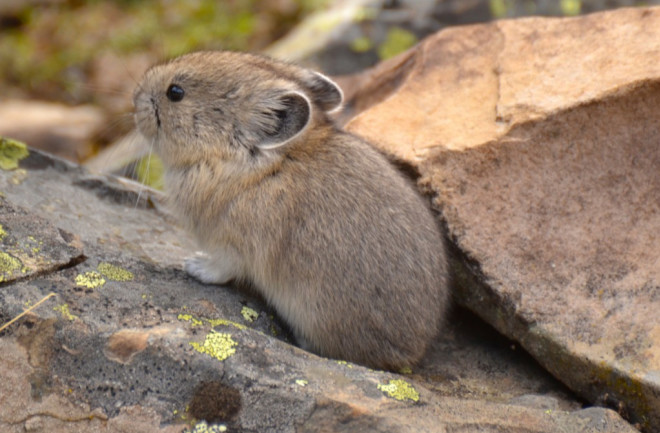 Pikas are related to rabbits and live at high elevations in the mountains of North America. Climate change is shrinking the areas where they can live. (Credit: Alison Henry) According to a survey from Yale University’s Program on Climate Change Communication, 70 percent of Americans think global warming is happening, but only 40 percent believe it will harm them personally. But what if those same people who believe they are somehow immune from harm were told climate change is being blamed for the demise of an adorable, fuzzy, innocent creature? Oh, the feels. Things, perhaps, just got personal. That’s exactly what’s playing out in a 165-square-mile stretch of California’s northern Sierra Nevada mountains. In this corner of the country, the American pika has entirely disappeared and gone elsewhere, and researchers are saying this is the largest area of pika extirpation—vanishing from a particular area while existing elsewhere—ever reported. It's a shift that's opened a large gap in the population distribution in the area, and driven a rift between populations to the east and to the west. Pika’s have a rapid metabolism and they generate a lot of heat. In winter, rather than hibernate, they amass haypiles and use their fur to stay warm and burrow into the snow. But the cooler climes in high altitudes are growing warmer, and that’s left the pika’s vulnerable to overheating in summer. When it’s too hot during summer, the critters don’t gather enough food for colder months. In a study published Wednesday in the journal PLOS One, researchers from the University of California, Santa Cruz describe a multi-year survey of pikas in an area that runs from Tahoe City to Truckee. Over the course of six years (2011 to 2016), researchers scouted the area for pika scat and other signs of activity. "We found old pika fecal pellets buried in sediment in nearly every patch of habitat we searched," UCSC researcher and lead author Joseph Stewart said. "But the animals themselves were conspicuously absent." All signs point to a gradual retreat from habitats in lower elevations that are growing warmer. Fortunately, pikas still persist in areas surrounding the focus of the study, but the future doesn’t look bright. Stewart forecasts a roughly 97 percent decline in pika numbers by 2050 if current trends persist in the Lake Tahoe area. There is some good news: pika populations elsewhere have shown they can adapt to change. American pikas tend to stick pretty close to their native habitats, which has led to the rise of many distinct populations around the country. While pikas prefer cool, rocky, high-altitude environments, Erik Beever, of the U.S. Geological Survey’s Rocky Mountain Science Center, has compiled evidence of pikas making their homes on the shores of lakes and reservoirs, downed logs, slash piles and forests. These habitats may be both cool enough during summer and offer a buffer against bitter winter temperatures. Beever also found that pika populations, like those in the Columbia River Gorge, have supplement their diet of hay with mosses, which lets them focus on other activities during summer other than building a hay stockpile. While the Lake Tahoe pika population may be in trouble, pikas in other parts of the country may fare better in an era of change.