Pic of the Week: The Arctic Blanket 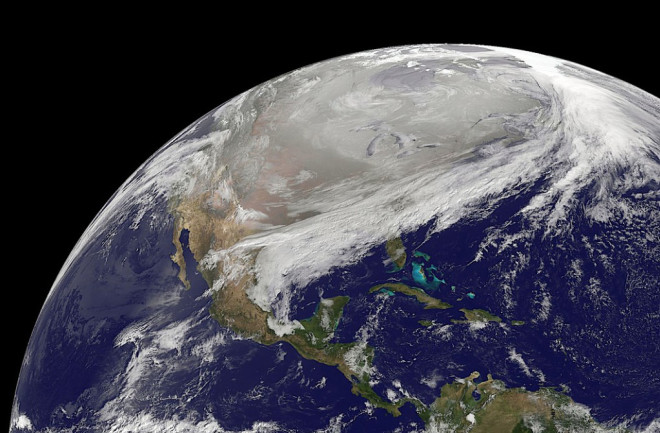 GOES 13 weather satellite image captured on Jan. 28, 2014. (Source: NOAA/NASA GOES Project) Earlier this week I shared a visualization of the recent Arctic blast that swept across much of the United States. Today I thought I'd feature another extraordinary view — a weather satellite image from Jan. 28th showing much of the United States covered by an Arctic blanket of frigid air. The astonishing extent of the cold outbreak is evident in the image, extending from the very high north of Canada all the way down to the Southeastern United States. And underneath that thick band of clouds running from the Gulf of Mexico all the way up the East Coast is the hapless city of Atlanta. We all know now that countless people there suffered terribly from the unusual winter weather. The image above is a cropped version. Here's the full disk of the Earth as seen by the GOES 13 satellite:

Source: NOAA/NASA GOES Project Although the first image is more immediately compelling, I find this one just as extraordinary. That's because it shows the extent of the Arctic blanket in the context of an entire hemisphere of the Earth. It's huge, covering much of the North American continent.

Lake Michigan on Jan. 28th, 2014, as seen by NASA's Aqua satellite. (Source: NASA) Lastly, an image of Lake Michigan, captured by the Aqua satellite on Jan. 28th. Streamers of cloud are seen blowing from west to east. And hugging the shore, a great deal of ice. The next day, much of the ice that had formed along the western shore had been pushed by the winds to the opposite side of the lake, as seen in a series of images on the ever fabulous CIMSS Satellite Blog. You can check them out here.