Photo: Guatemala's Crazy-Deep Sinkhole (No, It's Not Photoshopped) 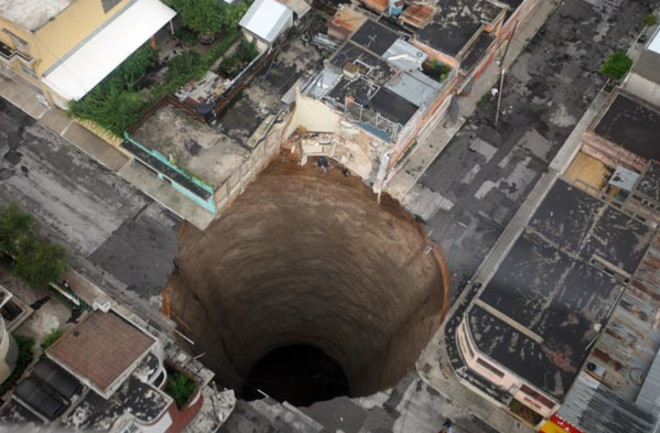 The sheer jarring starkness of it makes this photo look Photoshopped. But the massive sinkhole that collapsed into being in Guatemala City this weekend is deadly real.

The seemingly never ending hole appears to be about 200 feet deep, according to numerous reports [Los Angeles Times].

Tropical Storm Agatha pounded the Central American country, and as of this afternoon the death toll stands around 175. Some of that death and destruction came via mudslides and flooding. However, this gaping hole has captured the world's attention.

In the northern part of Guatemala City, the downpour created a sinkhole the size of a street intersection. Residents told CNN that a three-story building and a house fell into the hole [CNN].

Unfortunately, the sight is not unfamiliar in Guatemala. The country experienced a similarly daunting sinkhole in 2007 (see photos

). A ruptured sewer line caused that one by releasing too much water and softening the ground. It's not out of the question that the same thing could have happened here, hydrogeologist James Currens says.

A burst sanitary or storm sewer may have been slowly saturating the surrounding soil for a long time before tropical storm Agatha added to the inundation. "The tropical storm came along and would have dumped even more water in there, and that could have been the final trigger that precipitated the collapse," Currens said [National Geographic].

Related Content: 80beats: Why Chile's Massive Earthquake Could Have Been Much Worse

, the open source map that could save you from a sinkhole Bad Astronomy: Top 10 Astronomy Pictures of 2007

, featuring something like a sinkhole on Mars Image: Guatemalan government