Photo feature: a lenticularly gorgeous sunset along the Front Range of Colorado 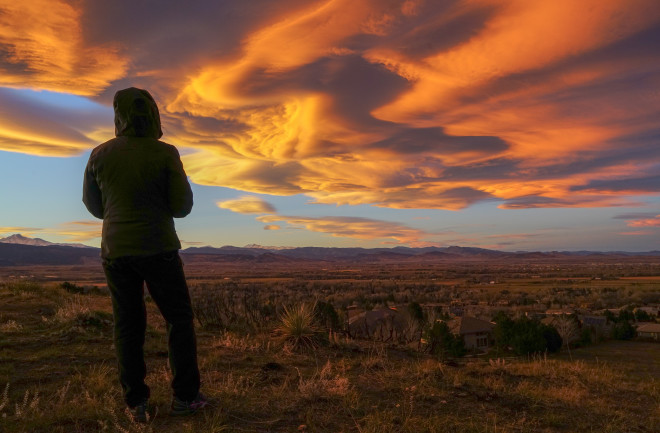 Lenticular clouds at sunset along Colorado's Front Range mountains on Sunday, Nov. 19, 2017. (Photo: ©Tom Yulsman.) The cloud formations in the photograph above, and those to follow, may look otherworldly, and maybe even a bit ominous. But they are perfectly benign (except when they herald an approaching storm), and are well known to meteorologists. The scientific name for these cloud formations is "altocumulus standing lenticularus.' But from here on out, I'll just refer to them lenticular clouds. If you've never seen lenticular clouds like these before, whether in pictures or in person, you might be tempted to believe that I've gone bananas with Photoshop. Not at all. I can assure you that what's depicted in these images is what I saw this past weekend near my home in Niwot, Colorado, just east of the Front Range. (But in the interest of full disclosure, I have brightened the shadows a bit so that the landscape would look as it did to my own eyes.)

The lenticular cloud formations as they appeared shortly after the Sun had set. Gold colors dominated, with orange, red and even green to follow as the sunset progressed. (Photo: ©Tom Yulsman) Lenticular clouds like these often form when strong winds aloft are forced up and over high mountains. And mind you, ours are particularly high! In the photo at the top of this post, the mountain visible just to the left of my wife and way in the distance is Longs Peak, elevation 14,259 feet.

Schematic of lenticular mountain waves. (Source: National Weather Service) The air forced upward by the mountains is analogous to water flowing in a swift stream over a rock. Just downstream of the rock, the water then accelerates back downward – only to rise back up in one or more standing waves. These are akin to the ripples that occur when you throw a pebble in a pond. This schematic illustrates the phenomenon. Moist air is forced upward as it passes over the mountain, and again in a standing wave downstream. As these parcels of air rise, they cool. And that cooling causes moisture to condense into clouds at the crests of the waves. Often, these clouds can look like flying saucers. But here along the Front Range they are often layered and contorted in intricate, spectacular patterns — accentuated, of course, by the brilliant sunset glow. What's up with that?

©Tom Yulsman These patterns occur as turbulent winds in the standing waves sculpt the clouds. Also, there can be multiple oscillations stacked up, one atop the other, creating layering in the cloud formations. Add it all together, throw in the sunset light, and you get what you see in the photos above, as well as the others to follow.

©Tom Yulsman As the sunset progressed, the orange and red colors turned to pink – and then eerie greenish tones began to emerge! I'm pretty sure this is the same phenomenon often observed with thunderstorms occurring late in the day. In the photo above, some parts of the cloud formation are no longer catching as much of the Sun's fading light as other parts are. So these portions appear darker. And even though you can't see it here, they are also bluish due to scattering of light by cloud water droplets. At the same time, this darker, bluer part of the cloud formation is still receiving some yellowish light from the sun. And what do you get when you add blue and yellow? Green of course!

©Tom Yulsman The light continued to fade until all of the cloud formations had taken on that vaguely greenish cast. It seemed like sunset was done, so we started back toward home. But from past experience I knew that sometimes the sunset glow can return – and so it did this time. The image above shows what that looked like. I am not sure why this happens, but I suspect that even though the Sun is below the horizon, its light can be bent up and over it by refraction. Why this should happen in two separate episodes, one earlier and the second later, I don't know. If you have an idea, share it in the comments section.

©Tom Yulsman I leave you with this image – a closeup of the clouds shot with a telephoto lens. It shows detail in the cloud formation just before the second wave of sunset glow dissipated. It's something of a Rorschach test. I will leave it to you to interpret what you see here...