Phantasm of the Antarctic Atmosphere

Image of the Day

A lenticular cloud hovers above pressure ridges in the sea ice near Mount Discovery in Antarctica. (Photograph: Courtesy Michael Studinger/NASA) If you've followed ImaGeo much, you've probably noticed that I'm obsessed with clouds, and particularly a kind of cloud that often takes on a phantasmagorical appearance. It's a called a lenticular cloud, and I've posted a number of images of them since I launched this blog. (Here and here, for example.) So I was planning on taking a break from lenticulars for awhile, but then I found the photo above and felt that it was so spectacular that I just had to share it. This lenticular cloud hovers above the sea ice near Antarctica's Mt. Discovery. In the middle distance is a jumble of jagged ice — a pressure ridge shoved up by the ever shifting sea ice. The scene was photographed in November by Michael Studinger, head of NASA's Operation IceBridge. As part of the multi-year mission, Studinger and his colleagues are monitoring conditions in Antarctica and the Arctic until a new ice-monitoring satellite, ICESat-2, launches in 2016. (You can find more his photos from the mission here.) 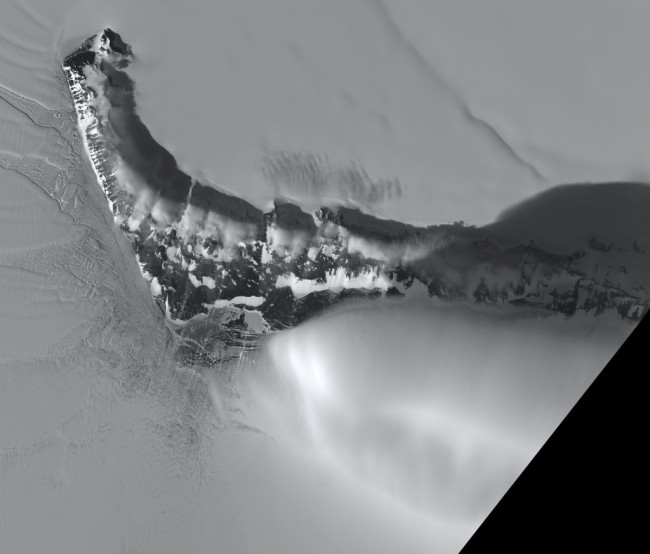 What appears to be a lenticular cloud hovers downwind of a rocky promontory near Mt. Discovery in Antarctica, as seen from orbit in this Landsat image captured in late Novermber, 2013. I thought I might get lucky and find a Landsat image of the same exact area on the very same day that Studinger shot his photo. My idea was to do a kind of upstairs/downstairs treatment — a photo from the ground complemented by one of the very same cloud from space. I wasn't quite so lucky. But I did find the Landsat image above of a rocky promontory called Minna Bluff, which juts out into the Ross Ice Shelf near Mt. Discovery. Although Landsat didn't capture the image on the same day that Studinger took his photo, it is from late November — and sure enough, it shows what appears to be a lenticular cloud. (It's the partially glowing feature in the lower right half of the image.) These fantastic features form when the wind blows across a topographic barrier, pushing the air upward. If conditions are right, standing waves can form in the atmosphere, which are not all that dissimilar from waves downstream of rocks in a stretch of river rapids. The air cools at the crest of such a wave, causing water vapor to condense into cloud. 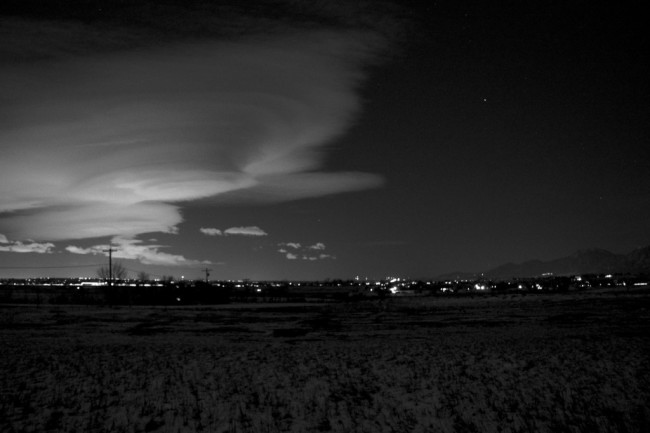 A lenticular cloud above Boulder, Colorado on the evening of Dec. 10, 2013. (Photo: © Tom Yulsman) I was already planning this post yesterday when, on my way home from work at the University of Colorado in Boulder, I spotted a flying-saucer-like lenticular cloud illuminated from below by the lights of the city. At the time, winds were gusting over 50 mph. I did the best I could to steady myself, propped the camera on a railing, cranked up the ISO to 1600, gingerly pressed the shutter release, and hoped that the long shutter speed wouldn't blur the details. With a little post-processing (including converting the RAW image to black and white), the result is the photo above. I think it came out okay, considering.