PetriDish: Fund the Science You Want to See Happen 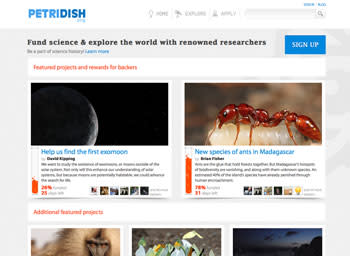 Two years ago, a pair of scientists put out a shingle

on the crowdfunding site Kickstarter: They needed, by hook or by crook, to get to Mexico to study a rare species of quail. 55 people signed up to fund their project to the tune of almost $5,000 dollars, in return for quail T-shirts, books, and the profound thanks of the researchers. The New York Times wrote about it

, and ever since, there has been talk of a place on the web just for crowdfunding science. The newly launched PetriDish.org

is an answer to these prayers. The site is visually appealing---cartoon test-tubes fill up with bubbling orange fluid as the projects get funded, and the introductory videos from researchers convey their excitement both about their work and about engaging the community. The nine handpicked projects now on the site are fascinating: funding the search for new species of ants in one of the last standing pristine Malagasy forests

, helping get DNA sequences for one of the longest-studied wolf populations in the world

, and pitching in to find the first moon orbiting a planet beyond our solar system

, among others. And there are perks for the folks who chip in. The scientists and the team beyond PetriDish have put together rewards for backers that range from framed pressings of one team's algae samples

to getting a species named after you

. I asked Matt Salzberg, the founder of PetriDish, about the site and the projects. What are some of your first crop of projects on PetriDish? Well, one of the projects is to record the first ever sounds of deep-sea creatures on cold seeps

. Cold seeps are areas that have been discovered to be teeming with new kids of strange life. They're deep, so it's dark down there, and the theory is that sound plays a key role in how these organisms interact, but no one's ever recorded or studied sounds in these deep environments. By backing the project

, you have the ability to help record these sounds and understand how these ecosystems behave. There's a number of really awesome rewards for that one, like getting a recording of those first sounds, straight from the researcher. Another one is from David Kipping, an astronomer at Harvard who is doing the first ever search for moons outside of the solar system

. There's a huge search for exoplanets going on, but no one's ever looked for or found a moon, outside of the solar system before. He's using Kepler to do that, but the bottleneck for him is computing capacity, so he needs to buy a supercomputer. By backing his project

, you can help him discover the first ever moon outside the solar system; in exchange you can get things like a signed copy of an artist's rendition of an exomoon, or you can even get the supercomputer named after you. How do you choose the projects featured on PetriDish? We pick projects very differently than traditional funding sources, on three primary criteria. We pick projects we think donors will be excited to be a part of, and that could offer fun perks or rewards to backers. But we also pay attention to the quality and affiliations of the researcher or organization behind them. We also screen the projects to make sure that the research is meaningful and that there is no "junk science," like perpetual-motion machines. Ultimately, however, the beauty of our model is that the funding decisions are in the hands of the public to back the projects they want to see happen. The emotion that we're trying to get across is that people are so excited about new discoveries, new ideas, and science, but a person at home has no way to feel like they're a part of that, except for reading along. We wanted to build a site where people could be part of the story, where you can make a new discovery happen---you can point to something and say, "You know what, if it wasn't for me, this discovery would not have happened yet, this new species of ant would not have been discovered, this moon outside of the solar system would never have been found. I contributed to understanding the dynamic that goes into monkey communication." There are a lot of cool things that you can make happen. Who do the scientists tend to be? Are they younger folks looking for help funding their first research projects? Or are they established folks looking to fund side projects? We've had hundreds of scientists reach out to us to apply to Petridish, and they range dramatically in background. We have tenured professors who want to have their research shared with the public or to start a new project their current funding doesn't support. We also have younger professors, post-docs and graduate students who want to use our platform as well. Some projects are established lines of research, and others are early-stage experiments looking for data to use to apply for larger grants from the government. What's special about our model is that it's very flexible for many situations, unlike the existing funding system. Most of our researchers are able to get funding through traditional routes, but the traditional process is very slow, comes with restrictions on how the funds can be used, and is time-consuming. We are a much more researcher-friendly funding source. Additionally, there are many types of research projects for which there just isn't traditional funding available. Often these are earlier, smaller projects, or research in out-of-favor fields. Petridish is often an only resource for projects of these types.

When are a lot of resources for citizen science around---opportunities for people to contribute to studies, say, about birds in their state or microbes in their homes---how does PetriDish fit in?

Backing one of our projects allows you to be a part of something truly exciting that the average person couldn't do themselves. We're working with really cutting-edge scientists pushing the boundaries of research and exploration. Through projects on Petridish, you could help the world understand the rare butterflies of Peru

, capture the dissolving cultures of climate refugees in Alaska

, shed light on the vocal communication of Gelada monkeys

---backers in our projects can be a part of science history by helping make new discoveries happen.

Check out PetriDish, and tell us here in the comments what you think. Did you find a project that excited you?