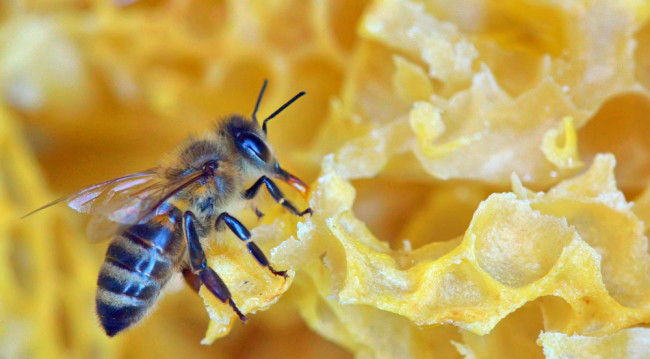 Researchers racing to find the cause of Colony Collapse Disorder (CCD), which has been killing off honeybees in much of the U.S. and Europe, are zeroing in on the culprit. And — surprise — mites are apparently no longer suspects. But cold winters may be accomplices to the crime. Studying colonies of honeybees (Apis mellifera L.) at three locations in central Massachusetts during the 2012-13 winter, researchers found that two widely-used pesticides were directly responsible for the hive abandonment and death of several colonies. Comparing their results to previous research, the scientists noted that colder winters may aggravate the negative effects of the pesticides.

For the study, appearing today in the Bulletin of Insectology, researchers monitored 18 bee colonies — six in each location — from October 2012 through April 2013. A third of the colonies were exposed to low doses of the pesticide imidacloprid, while another third were exposed to the pesticide clothianidin. Both pesticides belong to the neonicotinoid class and are commonly used in agriculture. The remainder of the colonies were left untreated. The numbers of bees declined in all 18 colonies with the onset of winter weather, which is the usual seasonal pattern. In January, however, while the control colony populations began to increase as expected, the number of bees in the treated colonies continued to decline. By April, 50 percent of the treated colonies had been wiped out, showing the hive abandonment pattern typical of CCD.

Researchers noted that one of the control colonies also was lost, but its thousands of dead bees were found inside their hive, showing symptoms of Nosema ceranae, an intestinal parasite. When CCD first emerged in honeybee colonies in the mid 2000s, N. ceranae was put forward as a possible cause. Subsequent research in Europe, however, has suggested N. ceranae was widespread in many areas before CCD and is not associated with the phenomenon. Although other studies have suggested that pesticides, particularly neonicotinoids, cause bees to become more susceptible to mites or other parasites that then kill off the bees, today's study found that bees in the CCD hives had the same levels of parasite infestation as the control colonies. This finding led researchers to conclude that pesticides themselves were directly responsible for causing an as-yet-unidentified but lethal danger to the bees. The team also noted that, in their previous study on a possible link between imidacloprid and CCD in 2012, the mortality rate for treated colonies was significantly higher — 94 percent — with an earlier die-off. The researchers suggested that the unusually cold winter of 2010-11, during which they conducted the study, exacerbated the effects of the pesticide on the bee populations. CCD threatens not only bees but entire economies and the world food supply. Honeybees pollinate about a third of crops worldwide and, according to some estimates, as much as 80 percent of U.S. crops.