No, calamity is not imminent. But new findings offer worrisome insights into the ongoing transformation of the Arctic—and our planet. 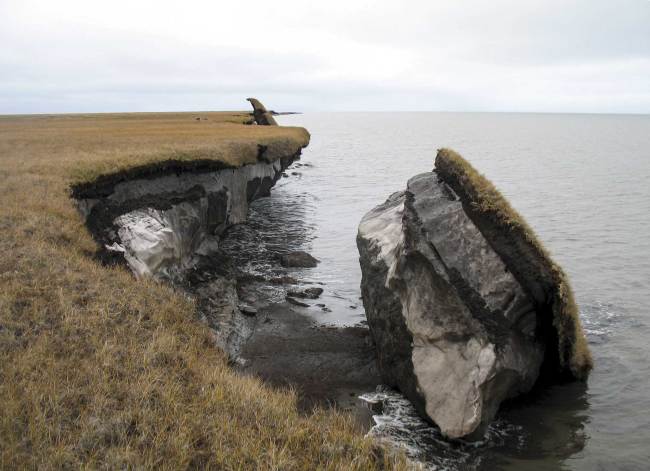 I've added some commentary at the end of this piece on the implications of the permafrost research described here. | The coldest reaches of the Arctic on land were once thought to be at least temporarily shielded from a major — and worrisome — effect of a warming climate: widespread melting of permafrost. But a recent study suggests these northernmost Arctic areas are likely to thaw much sooner than expected. That's concerning because melting permafrost releases climate-warming greenhouse gases. Overall, the new findings, coupled with previous research, suggest that the Arctic has entered a new epoch — call it "The Great Thawing" — with implications for the entire planet. Permafrost is permanently frozen soil, sediment, and rock, sometimes found with wedges of ice. Although it is found across 15 percent of Earth's surface, it harbors about half of our planet's stores of soil carbon. Scientists have long feared that a warming climate would cause substantial amounts of that carbon to be released into the atmosphere in the form of carbon dioxide and methane, helping to accelerate global warming. The new study found that if humankind's emissions of greenhouse gases continue unabated, permafrost in the coldest Arctic areas will experience widespread melting during this century — not centuries hence, as previously thought. As they do, they will become a net source of additional climate-altering carbon to the atmosphere. The transition will peak in the relatively short span of 40 to 60 years. "We keep finding more surprises," says Nicholas Parazoo of NASA's Jet Propulsion Laboratory, lead author of the study, which appears in The Cryosphere, a scientific journal. "And the scary word in all of this is ‘irreversible.’ Once we thaw permafrost, it becomes very difficult to refreeze.” 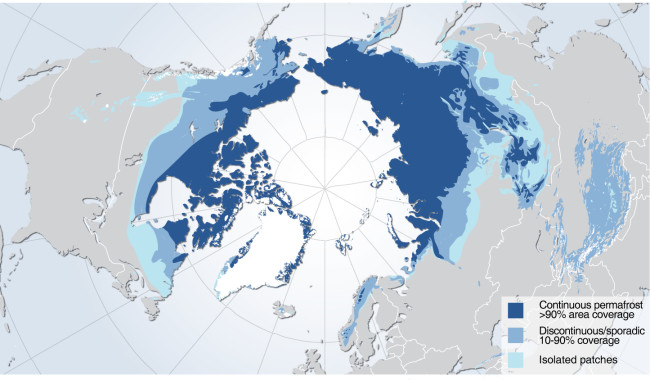 Permafrost zones of the Northern Hemisphere. (Source: Hugo Ahlenius, UNEP/GRID-Arendal via NASA) In the study, Parazoo and his colleagues employed a sophisticated computer model that simulates what happens to carbon in permafrost as the Arctic responds to a warming climate. Carbon being liberated from melting permafrost is one those changes — but it’s not the only one. A warming climate also tends to stimulate growth of shrubs, trees and other vegetation, as well as their spread northward into areas of tundra. This is important because growing plants take carbon out of the atmosphere, offsetting what is liberated from thawing permafrost. Many previous studies have looked only at one side of this equation: the release of carbon. But to understand the full picture, the other side must be considered too. And that's just what Parazoo and his colleagues did in their modeling study, paired with observations of what already is happening as a comparison check on the modeling results. The simulations showed that widespread and essentially permanent thawing of permafrost will occur across most of the northern high latitudes by the year 2300. Of this area, about 2.4 million square miles (6.2 million sq. km) — an area about three quarters as large as the United States — is projected to become a long-term source of carbon to the atmosphere. That projection takes into account increased plant growth. Between now and 2300, the total emitted carbon will amount to 120 billion metric tons. And most of it will come from the coldest, northernmost region. During this century alone, that northernmost area will emit a little under 10 billion tons as the permafrost there thaws much more quickly than expected. And overall, a cumulative total of some 95 billion metric tons of carbon will be released there between now and 2300, according to the study. Ninety-five billion tons is about a quarter of all the carbon spewed into the atmosphere from fossil fuel burning since the start of the industrial revolution in 1870. Looked at another way, it's about 10 times as much carbon as was produced by all fossil fuel burning in the year 2016. The study showed that areas further south will take longer to become a net source of carbon, and produce less of it by 2300. That’s because warmer temperatures there are projected to cause more growth of shrubs and trees. But over the long run, this more southerly environment will catch up. The reason: In a warming climate, wildfires become more frequent and take out many of the shrubs and trees. "Then the permafrost emissions offset the carbon uptake by this vegetation,” Parazoo says.

Animation of natural- and false-color satellite images of wildfires burning in Siberia in 2016. (Images: NASA Worldview. Animation: Tom Yulsman) While not trivial, the total emissions projected to come from permafrost by 2300 don’t really compete with fossil fuel burning. But that should not be terribly comforting. "We will still have an extra source of carbon to deal with," Parazoo says. Given how challenging it will be to limit global warming to less than 2 degrees C, as spelled out in the Paris Agreement on climate change, every billion tons of carbon that find their way into the atmosphere will count. As a 2015 overview article in the journal Nature put it, somewhat dryly:

Although never likely to overshadow emissions from fossil fuel, each additional ton of carbon released from the permafrost region to the atmosphere will probably incur additional costs to society.

Moreover, there’s nothing magical about the year 2300 — carbon won’t simply stop leaking from thawing permafrost soils at that point. Parazoo's simulations show "no signs of slowing," he and his co-authors write. Over the long run, permafrost could add huge amounts of carbon to the atmosphere, with a potentially large impact on Earth's climate. To really appreciate this, it helps to know something about the nature of permafrost. Let's start with a comparison: In a relatively toasty environment, microorganisms break down dead organic mater into simpler chemical components, releasing CO2 in the process. If you've ever left food out on the counter for a long time you have an idea what happens. As the microorganism go to work on the organic matter, the food spoils. And those nasty odors? They can be some of the chemical byproducts of the breakdown process. But if instead you put the food in the freezer, it's a very different story. The organic matter is protected from microbial activity by the cold temperatures. That's what happens on a large scale in the high north. Over many thousands of years, the remains of plants and animals have been accumulating in the permafrost freezer, locked away from microbial decay. As a result, an estimated 1.7 trillion tons of carbon is believed to be stored in organic matter within these permafrost deposits. In addition to comprising half of Earth’s soil carbon, that's nearly twice as much as all the carbon in our atmosphere. “That’s a lot of carbon, sitting there for a long time, frozen,” Parazoo says. But global warming has opened the permafrost freezer door, allowing microorganisms an opportunity to begin breaking down that organic matter, releasing carbon into the atmosphere in the form of carbon dioxide under certain conditions, and methane in others. Make no mistake about it, the high north is heating up. The Arctic region is warming twice as fast as the Earth overall, a phenomenon known as Arctic amplification. And according to Charles Miller, a co-author and colleague of Parazoo's at NASA, permafrost soils are warming even faster than Arctic air temperatures — as of 2013, up to 4.5 degrees Fahrenheit in just just 30 years. “It’s going to thaw out because of Arctic amplification," Parazoo says. “Permafrost is very vulnerable to climate warming. The questions are timing and magnitude.” His study provides some broad answers to those questions. But many of the finer details still need to be worked out. Moreover, more studies are necessary to corroborate what Parazoo and his colleagues have found. All signs point at least to this conclusion: We're at the beginning of a great thawing that is likely to play out over centuries. As it does, the Arctic — and our planet overall — will be transformed. There could be surprises — the great thawing could happen more rapidly, with faster emissions of carbon that could hit the climate even harder. Also keep in mind that the Arctic has already experienced monumental shifts that are affecting local communities and native species. As the region has warmed more rapidly than any other, sea ice has shrunk precipitously. In fact, sea ice this winter has been running at record lows, and March may well bring the lowest wintertime extent on record, following record lows for the past three years. Contracting sea ice, and other shifts in a rapidly warming Arctic are triggering changes to Arctic ecosystems from the bottom up. Those changes are putting terrestrial Arctic species at risk, including wolverines, lemmings and snowy owls — not just polar bears. And what happens in the Arctic doesn't stay in the Arctic. In addition to affecting weather farther south, the region is seen by scientists as the proverbial canary in the coal mine — a warning to us that more rapid change is coming elsewhere — and not centuries from now, but much sooner. Seen in this context, widespread melting of permafrost and release of climate-warming greenhouse gases is one aspect among many of "The Great Thawing." And even though current research suggests it will occur on a timescale of centuries, that is no reason to delay action to rein in our emissions of greenhouse gases. The longer we wait, the more challenging it will be to avoid the worst outcomes, and also to adapt to inevitable changes over the long run. The research on permafrost by Parazoo and others reminds us that we will likely be living with climate change for a very long time. That reality argues for a rethinking of what we mean by "sustainable." "'Sustainable’ really means that we have found a way to think about long time scales, beyond one generation," says Antje Boetius, Director of Germany's Alfred Wegener Institute Helmholtz Centre for Polar and Marine Research. She points out that politicians and business people tend to think just a few years ahead. "But when we scientists talk about the future of the Arctic region, or when the indigenous people talk about the past and future, they mean generations, centuries, and even beyond." |

Correction: A previous version of this story said an estimated 17 trillion tons of carbon is believed to be stored in organic matter within permafrost deposits. The decimal point was misplaced. The actual number is 1.7 trillion tons. The story has been corrected accordingly. |