Parts of the U.S. Forecast to be Colder Today Than a Swath of the Arctic Not Far From the North Pole 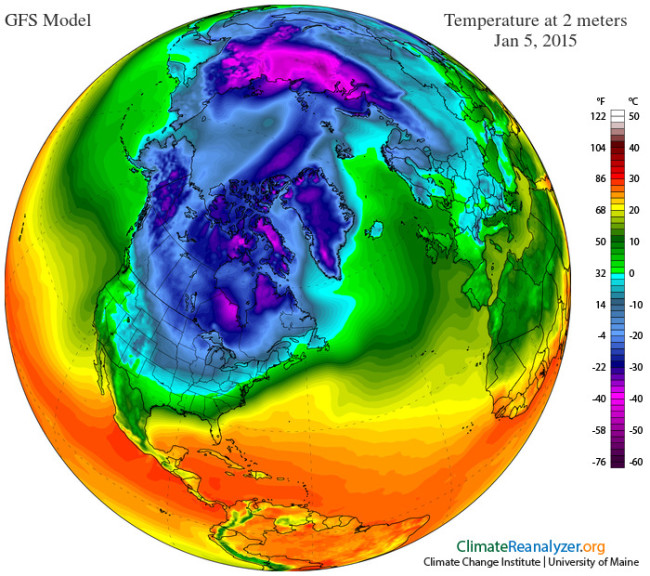 If you live in the U.S. Midwest and Great Lakes region, you probably don't need me to tell you that bitterly cold temperatures are spreading across the region. To offer just one bone-chilling example, the forecast high temperature for Chicago today is just 9 degrees F. And that doesn't even begin to tell the full story, since wind chill values will plunge as low as 20 below zero, according to the National Weather Service. Check out the map above showing forecast temperatures for today, January 5th. If my eyes are not deceiving me, some parts of the Midwest — North Dakota, northern Minnesota and Wisconsin — are forecast to be colder than parts of the Arctic not too far from the North Pole. And to make matters even worse, up to five inches of snow are predicted in parts of the Midwest, as an Alberta clipper low pressure storm system sweeps across the region and heads east.

Source: National Weather Service An Alberta clipper, by the way, is a very fast-moving storm that sweeps down from central Canada (in the vicinity of Alberta), and across the Great Lakes. Click the thumbnail map at right to get a visual on it. When I blog about Arctic blasts like this, I often get comments here and on Twitter questioning global warming. Comments like, "How about that global warming, eh?" So I thought I'd post the following image to remind us that the weather you may be experiencing is not necessarily an accurate guide to what's happening elsewhere. 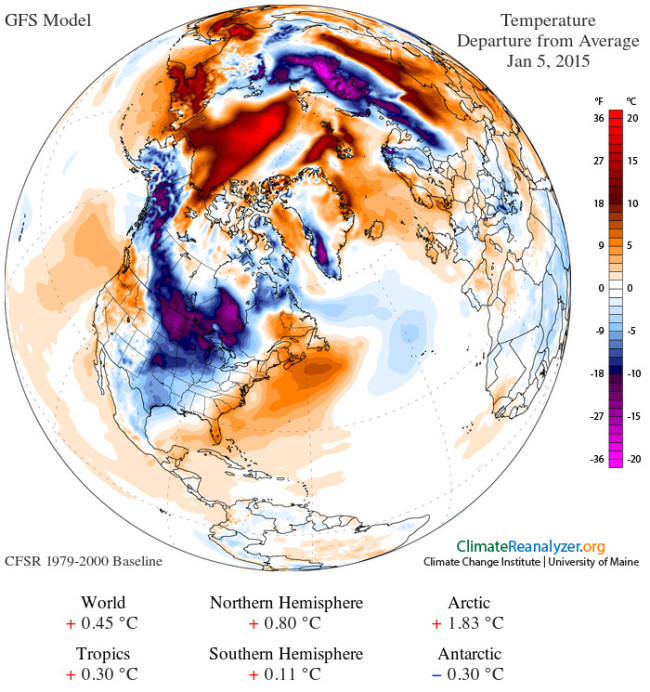 This is not a map of actual observations of how temperatures today are departing from average conditions. Rather it shows what what the GFS weather model is predicting for temperature anomalies. And that big splotch of blue fading into violet over North America is the Arctic blast that has plunged across the U.S. midsection and is spreading east. But look up into the Arctic. See that elongated blob of intense red? In this area, surface temperatures are forecast to be way higher than average — near the North Pole more than 30 degrees F warmer than average, in fact. Another point to remember is that we're looking at weather, not climate. Weather consists of the cold snaps here and the warm spells there — the day-to-day variations in the state of the atmosphere. Climate is how those variations add up over several decades. I suspect that as the cold settles in, we'll hear commentators on television and elsewhere joking about global warming. Just keep in mind that no matter what is happening in Chicago or Detroit or Pittsburgh right now — or up near the North Pole, for that matter — it doesn't change the basic climatic reality: Each one of the last three decades has been successively warmer at Earth’s surface than any preceding decade since 1860. We'll soon know how the year 2014 stacked up compared to other years in terms of the global average surface temperature of the Earth. Indications are that it will turn out to have been the warmest on record. Stay tuned.