How did creatures climb out of the sea? A 370-million-year-old arm bone found in an ancient streambed in Pennsylvania is helping to answer one of evolution’s great questions. The three-inch humerus dates to when scientists believe lobe-finned fish gave rise to the earliest four-limbed creatures capable of crawling on land. 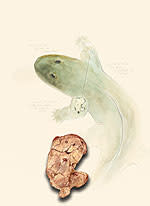 This fossil arm bone suggests that the first four-legged creatures did push-ups before they walked onto dry land.

“Fish have upper-arm bones, but it was thought that these early arms were used only as paddles,” says Neil Shubin, the University of Chicago paleontologist analyzing the find. Although the humerus of the unnamed Pennsylvania fossil resembles those of many types of contemporary fish, it seems adapted to a distinctly different, push-up motion. A series of ridges along the bone most likely provided attachment points for a set of powerful pectoral muscles. Flexing those muscles would have allowed the animal to brace itself against the current in a stream and to lift its head above the water in order to grab a breath of air.

Shubin deduces that the creature would have looked a bit like a two-foot-long salamander with massive limbs; it probably lived in shallow, plant-choked waters. Its similarity to its fully aquatic relatives implies that the push-up motion originally evolved among fish. Later fossils show a wide variety of shoulder structures, some of them more similar to those of today’s land animals, so the Pennsylvania creature is most likely not our direct ancestor. “It suggests there was an immense amount of diversity in the intermediary land and aquatic animals,” Shubin says, “which tells us evolution was less a stepwise progression than a lot of false starts.”

HealthWhat Is Hydroxychloroquine and Does It Treat COVID-19?