One of the most powerful N. Atlantic storms on record builds 55-ft waves and brings winter melting to North Pole 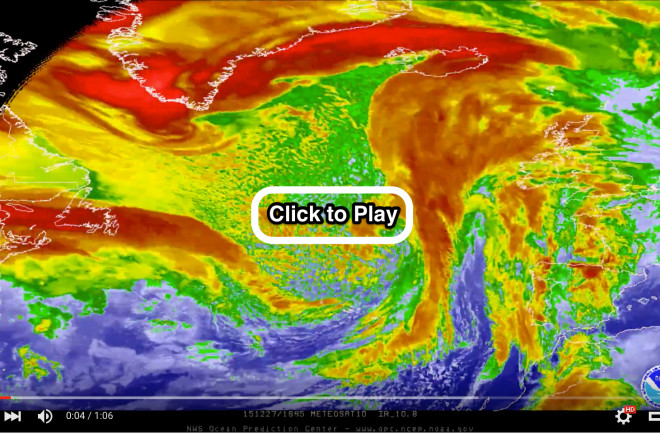 The low pressure system that exploded on Dec. 30, 2015 into one of the strongest storms on record in the North Atlantic is seen in this video consisting of enhanced infrared imagery from the Meteosat-10 satellite. The video shows the entire development of this extremely powerful system. Meteorological surface analyses also are included, at the end. (Source: National Weather Service Ocean Prediction Center) A monstrously powerful North Atlantic storm has done the unthinkable: By drawing warm air up from the south into the Arctic, it likely pushed up temperatures at the North Pole today to just above the melting point. The North Pole unfreezing — in winter? That's seems like a fitting way to end a year that will go down as the warmest on record, by far.

See also: 2015 will almost certainly end as warmest year on record — and 2016 is now forecast to be at least as warm

The temperature at the North Pole, as estimated by the weather models, crept up above freezing on Wednesday, Dec. 30, 2015, thanks to a powerful storm swirling near Iceland. (Source: earth.nullschool.net) In the graphic above, you can see the powerful storm swirling over Iceland, as visualized using data from weather models. The lines indicate wind direction, and colors are indicative of temperature. The green shows warm air being sucked up from south of the Arctic by the storm, and flung on a beeline over Svalbard and on to the North Pole. https://twitter.com/capitalweather/status/682038614000283648 As atmospheric scientist Angela Fritz of the Washington Post's Capitol Weather Gang explains:

On Wednesday morning, temperatures over a vast area around the North Pole were somewhere between 30 and 35 degrees Fahrenheit, and for at least a brief moment, surpassed the 32-degree threshold at exactly 90 degrees North, according to data from the GFS forecast model.

Fritz also reports that a buoy not far from the North Pole recorded a temperature above freezing, supporting the estimates:

Data from the International Arctic Buoy Programme confirms that temperatures very close to the North Pole surpassed the melting point on Wednesday. Buoy 64760 at a latitude of 87.45 degrees North hit a high temperature of 0.7 degrees Celsius — or 33 degrees Fahrenheit — around 8 a.m. Eastern Time.

The freak storm responsible for this mind boggling event derives from the same system that whipped up two deadly tornado outbreaks in the United States, one on Dec. 23 and the other on the 26th. The storm also is responsible for flooding in the Midwest that is likely to reach historic proportions. Once out over the Atlantic, the storm, dubbed "Storm Frank," quickly exploded into a hurricane-force low and intensified as it churned northeastward. It wreaked havoc in the United Kingdom, and then took aim on Iceland: https://twitter.com/birtalif/status/682154976123207680 In the Tweet above, from a meteorologist at the Icelandic Met Office, note the wind speed of 46.3 meters per second recorded in the far eastern portion of Iceland. That works out to just over 103 miles per hour. As it neared Iceland, the storm pushed up gargantuan waves reaching as high as 55 feet: https://twitter.com/NWSOPC/status/682212289672572928 That's as tall as an average five or six story building! Powerful North Atlantic storms that bring warm air north are certainly not unheard of. But this one was particularly powerful. Moreover, the warming it has caused in the Arctic comes on top of the warming caused by human activities. And the Arctic region has warmed twice as much as others. So I think it is safe to say that an event like this would have been much less likely in pre-industrial times. It will now be interesting to see how the huge amounts of heat pumped into the Arctic by the storm will impact conditions there over the coming weeks. That may be the subject of a future post here at ImaGeo. So please check back.