One Crusading Mycologist Spreads the Gospel of Mushrooms 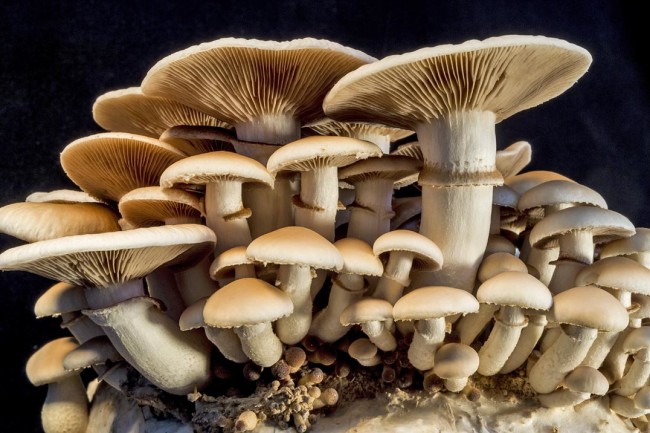 This gallery is a companion piece to our July/August feature "How Mushrooms Can Save the World." 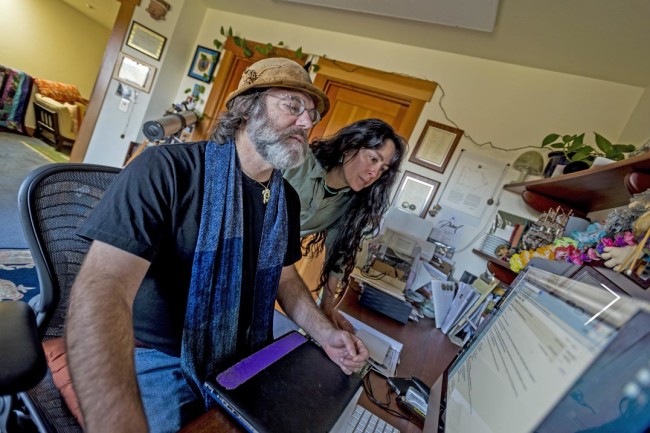 Stamets and his wife, Carolyn “Dusty” Yao (in their home office), have run Fungi Perfecti longer than a decade. The two became a couple in the late ’90s after Yao, an herbal medicine practitioner, took a temporary job as bookkeeper for the company. When Yao moved into Stamets’ ant-infested farmhouse, Stamets was inspired to invent a fungal pesticide, for which he was eventually awarded several patents.

Yao also helped Stamets branch out into the nutraceutical mushroom extracts that now form a major part of the business. She co-wrote the book MycoMedicinals: An Informational Treatise on Mushrooms with Stamets, and she regularly accompanies him on foraging expeditions. “Dusty finds at least four times more mushrooms than I do,” Stamets says. “I just follow her around, and she brings them to my attention.” 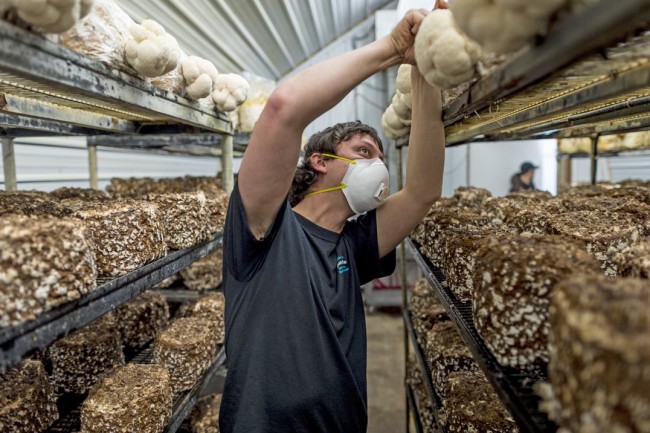 1) In a grow room at Fungi Perfecti, employee Justin Tulloss tends to a crop of Lion’s Mane (Hericium erinaceus). This species tastes like lobster when cooked, but what excites scientists, including Stamets, is the mushroom’s medical potential. In 1991, Japanese researchers discovered that Lion’s Mane contains two novel classes of nerve growth factor — molecules called hericenones and erinacines — that stimulate the differentiation and re-myelination of neurons. Since then, several laboratory trials have confirmed that these chemicals affect nerve regeneration.

What’s more, mice with amyloid plaques like those seen in the brains of Alzheimer’s patients performed better on maze tests — and showed higher levels of curiosity about unfamiliar objects — when fed Lion’s Mane. In one small study in Japan, human patients with mild cognitive impairments showed significant improvement when given the mushrooms in powdered form. None of this proves conclusively that Lion’s Mane can improve mental function, but Stamets is working with university researchers to explore possible therapeutic uses for these and many other mushroom species. 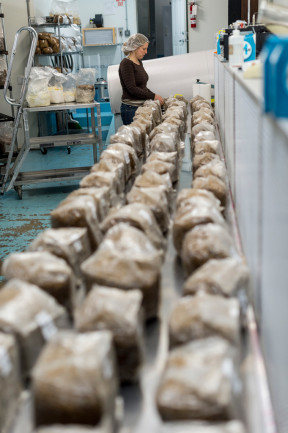 Pioneered by Stamets, mycorestoration draws on the natural properties of mushroom-bearing fungi to fight human-made pollution. Oyster mushrooms, for example, can digest the complex hydrocarbons in wood, so they can also be used to break down petroleum byproducts. Garden Giants use their mycelia to trap and eat bacteria, so they can filter E. coli from agricultural runoff. Field experiments have shown that these applications work in principle; the challenge now, says Stamets, is making them practical on an industrial scale.

Stamets’ latest inspiration is to use mushrooms to clean up contaminated soil around Japan’s Fukushima meltdown zone. His idea is to seed the area with fungi like Gomphidius glutinosus, whose mycelia are known to absorb radioactive isotopes. When mushrooms sprout, workers in protective suits would dispose of them as nuclear waste. Stamets recently co-founded a company devoted to implementing the concept. “This is a project that’s picking up steam very rapidly,” he says. 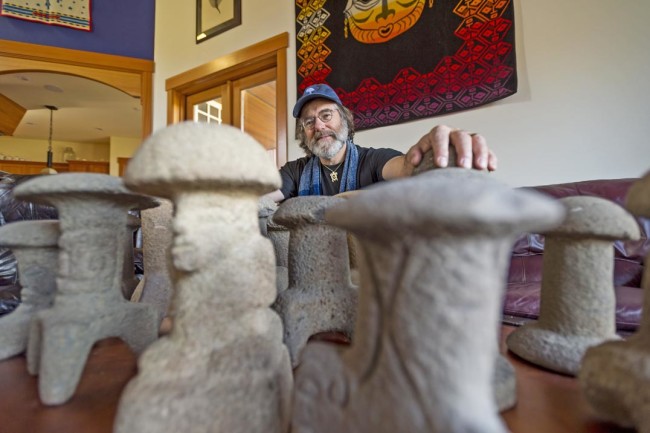 Although Stamets is known for dreaming up new uses for mushrooms, he is also fascinated by their traditional uses, including their role in ancient religious rituals. He’s an avid collector of Mayan “mushroom stones,” small statues crafted in the Pacific highlands of Guatemala between 1000 B.C. and A.D. 900. Anthropologists theorize that these artifacts represent psychedelic mushrooms (possibly psilocybin or Amanita muscaria), which may have been used by shamans to generate mystical states. Many such statues were destroyed by Catholic missionaries during the Spanish conquest; only about 200 are known to survive today. “There’s a really amazing vibe that comes off these stones, especially by firelight,” says Stamets.

Although his passion for mycology was sparked by his own experiences with psilocybin mushrooms as a young man, Stamets no longer advocates casual use of hallucinogens. “I’m conservative when it comes to psychedelics,” he says. “I don’t want to be around people who use them irresponsibly, or who deal them. It just feels unclean. When something is so powerful and sacred, it should be treated with the utmost respect.” 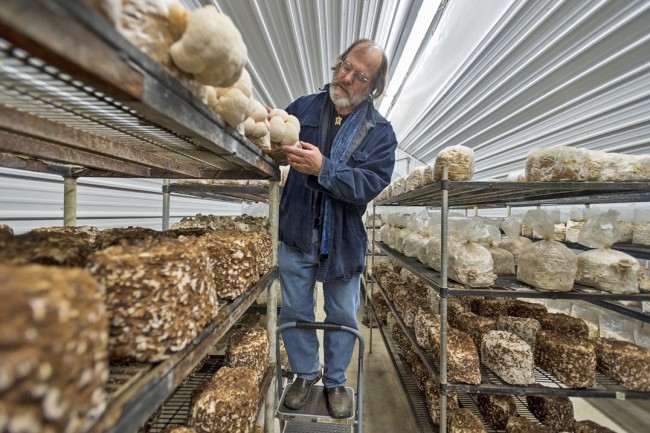 Paul Stamets' groundbreaking experiments and visionary zeal have made Stamets one of the world’s most influential mycologists, yet he has no academic affiliation. Instead, he does his research under the auspices of his private company, Fungi Perfecti.

Based in Shelton, Wash., Fungi Perfecti sells gourmet and medicinal mushrooms, growing kits, extracts and other products online and in specialty shops. Each week, grow rooms, like the one pictured here, produce up to 4,400 pounds of mushrooms and mycelia, the cobweb-like membrane from which mushrooms sprout.

“I know of no other technology except computer science that can be as influential in the survival of human life on this planet than that of mushroom mycelium,” says Stamets, who has been awarded six patents for mushroom-based inventions. “Yet the field of mycology is underappreciated, underpopulated and underfunded.” By working as an independent scientist-entrepreneur, he can follow his mycological obsessions wherever they lead him. 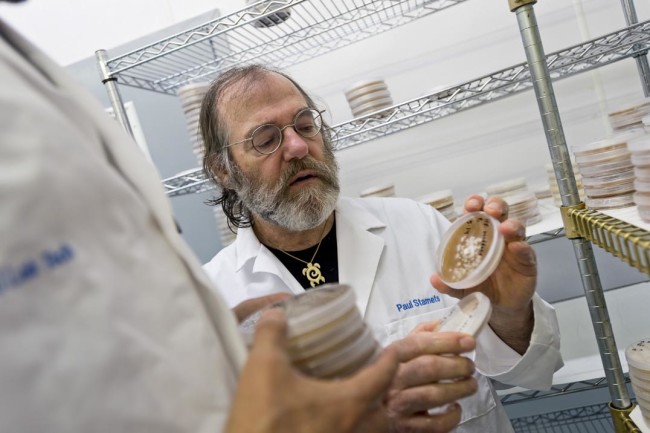 Over his three decades of research, Stamets (at right, with Fungi Perfecti employee Bulmaro Solana) has learned that different strains within a single mushroom species can contain markedly different active compounds. Some strains of Agarikon, for example, show strong activity against influenza viruses; others do not. For this reason, Stamets maintains an ever-expanding gene library of mushroom strains — more than 500 at last count — in petri dishes at the Fungi Perfecti manufacturing plant.

Many of the species Stamets collects can be found only in forests where trees have been growing undisturbed for at least 120 years. Such woodlands are increasingly rare because of logging and development, and Stamets worries that potentially beneficial mushroom varieties, some of them not yet recognized, are being lost in the process. “Preserving mycodiversity is a huge argument for the preservation of old-growth forests,” he says. 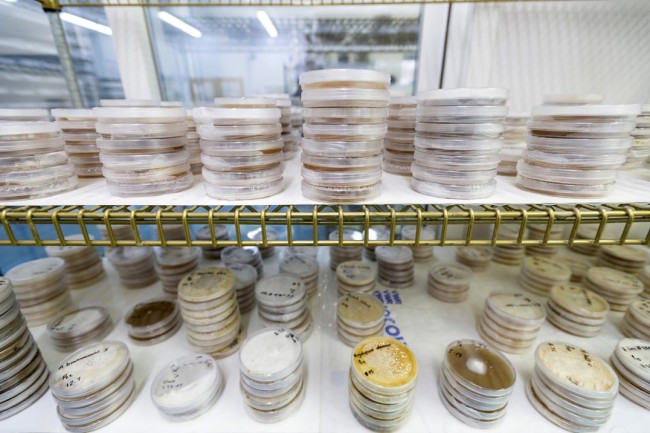 At Fungi Perfecti, mushroom propagation begins in a clean-room laboratory equipped with airlocks, laminar-flow hoods and other devices to prevent contamination by airborne mold spores or bacteria. After mushroom spores or bits of tissue are placed in petri dishes full of agar (shown here), threads of mycelia will gradually spread throughout the substrate.

Once a culture is established, it can be used to inoculate a growing medium known as spawn, which can be made from sawdust, rice, damp cardboard or other fungus-friendly material. Small quantities of mushrooms may be grown directly from spawn, in bags or pots. Spawn can be mixed with a bulkier substrate, such as wood chips or straw, to cover a larger area. In this way, the mycelium from a single petri dish can be cultivated to help provide food or medicine for thousands of people, or remove pollutants from soil or water.