On the Horizon: Corn Engineered To Survive Drought 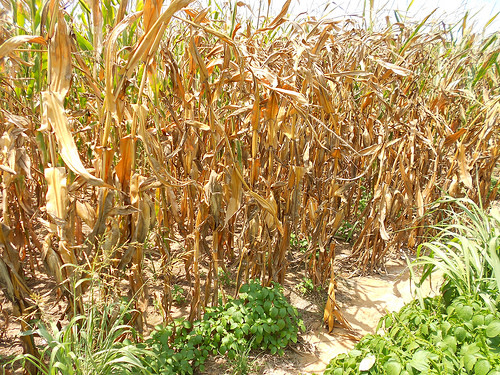 It has been a summer of withered crops and wildfires, the U.S.'s driest in the last fifty years, during which 55 percent of the U.S. has experienced a drought. And of the land dedicated to corn production, 87 percent has been dry. Over at Technology Review, Jessica Leber wrote about an engineering solution to the problem of parched corn: seeds bred or genetically enhanced to resist drought, some of which have been tested this summer and will be sold by three big seed companies next year. Leber's story features Syngenta's Agrisure Artesian, a type of corn that was bred, rather than genetically modified, to resist drought. It was sold in limited quantities this year. But Syngenta, along with DuPont and Monsanto, is also trying to figure out what kinds of genetic enhancements might help corn hold onto water better. This summer, Monsanto is testing Droughtgard, a breed of corn that contains a bacterial gene that lets it take up water more slowly. Why that would help in drought hasn't been addressed in most coverage of the breed, but that particular type of gene codes for proteins that help cells deal with physiological stress, including lack of water, by protecting essential molecules that might be damaged in drought, the Scientist Gardener blog explains. The new crop, being tested in Nebraska and Kansas this year, is the first crop of any sort on the market to be genetically engineered to resist drought. Droughtgard seed produced 5 to 15 percent more corn than regular varieties planted in dry land, Monsanto vice president Robert Fraley told a USA Today reporter. Though farmers and researchers have long worked to create drought-resistant crops, it has not been easy to do, even with the help of genetic engineering. Drought resistance is a more complicated genetic trait than herbicide resistance, for instance, which can be controlled by one or few genes. Potential genes that might be engineered to help corn collect and retain water include those that control the opening and closing of the stomata, pores on the underside of leaves through which plants lose water, and genes that make roots burrow deeper. Since each genetic modification is expensive, though, a Union of Concerned Scientists report questioned whether the benefits will outweigh the costs, as the Washington Post reported. “There’s little to suggest that genetic engineering will make a major contribution to drought tolerance and water-efficiency use in the next five to 10 years,” report author Doug Gurian-Sherman told the Post's Brad Plumer.