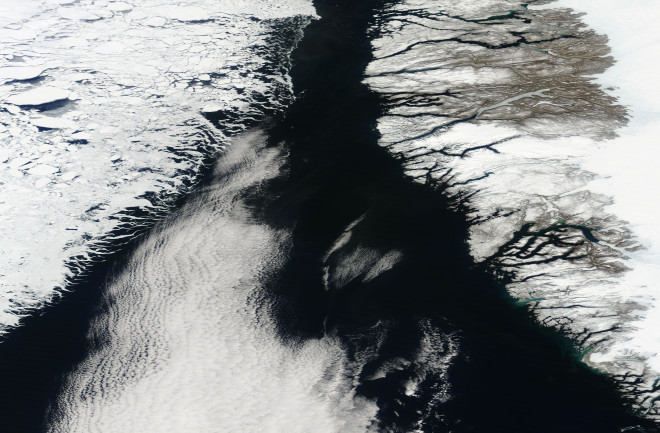 The edge of sea ice in Davis Strait between Baffin Island and Greenland is seen in this image from NASA's Terra Satellite. (Image: NASA) During one of my regular remote sensing ramblings around the globe using NASA's interactive Worldview web site, I spotted this scene and found it so compelling that I thought I'd share it. The image is based on data from NASA's Terra satellite. It shows the fjords of western Greenland on the right , and the filagreed edge of Arctic sea ice on the left. The dark body of water in between is Davis Strait between Baffin Island in Canada and Greenland. Graphically, I find it quite spectacular. But there's more to it than aesthetics. The extent of the sea ice in this region — as in the Arctic region overall — is less than the long-term average for this time of year. Ordinarily, it would fill more of the waterway, according to the update map from the National Snow and Ice Data Center. Arctic sea ice reached its maximum extent in March, and it is now shrinking as temperatures warm.