On the Bubble's Edge: Meteorological Fireworks 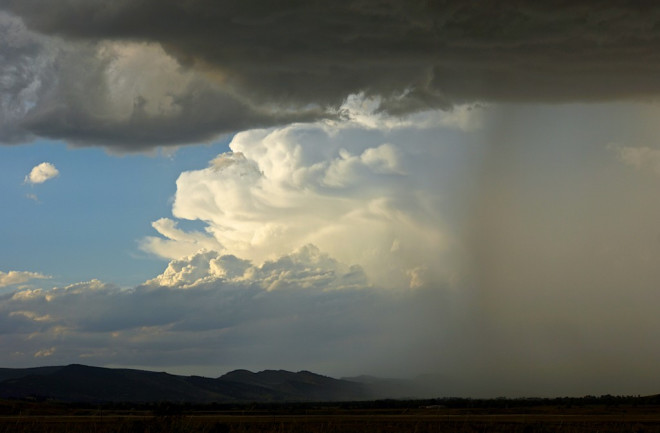 Thunderstorms swept across the base of Colorado's Front Range near Boulder on Friday. (Photograph: © Tom Yulsman) It's not yet Independence Day, but for people along Colorado's northern Front Range, the fireworks arrived early. I took the photo above just a couple of miles north of Boulder at 6:45 Thursday evening just as thunderstorms were sweeping in. The view is to the northwest, over the foothills of the Rockies. A sheet of rain and hail is to the right. The towering cumulus cloud catching the evening sunlight beyond moved off onto the plains and coalesced with other clouds, producing quite a downpour — a needed one, given our continuing drought. Here's what things looked like just a bit later, a few hundred yards from my house:

Cumulus clouds catch fire in the fading sunlight over Niwot, Colorado on June 28th. (Photograph: © Tom Yulsman) And before a bit of explanation, one more:

Close up of a cumulus cloud at sunset, near Niwot, Colorado. (Photograph: © Tom Yulsman) Before the outbreak of storms, temperatures in this part of Colorado had reached the mid-90s. That's just a few degrees higher than normal, and nothing compared to the scorching heat in the Southwest and Great Basin, where record highs for this time of year — and perhaps the highest temperature ever reliably recorded on Earth — may happen this weekend. In my previous post, I included an illustration depicting the kind of huge bubble of high pressure in the middle levels of the atmosphere that's causing the heat at the surface, as well as a graphic showing how a gigantic kink in the jet stream is helping to bottle it up. The Front Range of Colorado is on the very eastern edge of the bubble, where the jet stream is causing the wind to blow from the north. Here on the bubble's edge, the meteorological fireworks yesterday heralded the arrival of cooler air. The proximate cause of the spectacular weather was a bit of moisture and some unstable air. Now, this day has dawned with gloriously cool conditions. And the forecast is for a high only in the mid-80s — along with a decent chance for more thunderstorms. I'll be out there with my camera again.