On the 70th Anniversary of Hiroshima Bombing, Photos Document the Devastation. Plus: Personal Reflections. 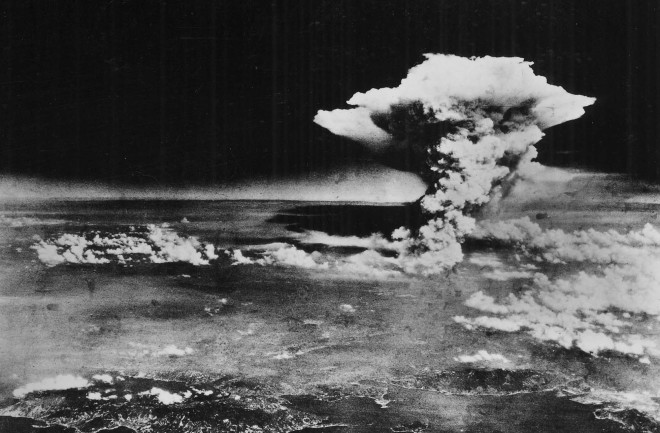 A mushroom cloud towers high above Hiroshima, Japan following detonation of the atom bomb, as seen from the Enola Gay flying over Matsuyama, Shikoku. (Source: Wikimedia Commons) Seventy years ago today, the crew of the Enola Gay B29 bomber, acting on behalf of the citizens of the United States and the Allies of World War II, dropped an atomic bomb on Hiroshima, Japan. It was the first time such a weapon had been used against a wartime target. The goal: end the most devastating conflict humankind had ever endured. At 8:15 a.m., the unimaginably violent explosion from the A-bomb killed 80,000 people instantly; another 60,000 died in ensuing months. Even so, Japan did not surrender. It wasn't until a second atomic bomb (of a different design) was detonated over Nagasaki three days later that the Japanese finally capitulated. I thought I would commemorate the anniversary of the Hiroshima bombing with images offering different perspectives on the devastation, as well as a few personal reflections.

A Japanese casualty of the Hiroshima bombing. Her skin was burned in a pattern corresponding to the dark portions of her kimono. (Source: Wikimedia Commons) In addition to the two photos above, I've included a selection of other compelling images below. So please make sure to see those too. But first, those reflections. When I was younger, I sometimes got into debates with my father over the atomic bombings. I argued that the devastation and misery inflicted on the citizens of Hiroshima and Nagasaki was unconscionable. He usually offered thoughtful comments, but in the end, his position was simple: If it had not been for the dropping of the bomb, an invasion of Japan — for which he was actually preparing in 1945 as a soldier — would have resulted in a million American casualties, and many more Japanese. The implication was clear: Had it not been for the bombing, he, and therefore I, might not be around to debate it. As it happened, of course, the Hiroshima and Nagasaki bombings forced Japan to capitulate and an invasion was not necessary. The million casualty number, however, continues to be debated, as does the question of whether it justified the dropping of the bomb. Each of us has to decide on that moral question for ourselves. But I don't think there is any serious doubt as to how horrific an invasion of Japan would have been. As D. M. Giangreco put it in a paper published in the Journal of Military History:

The Army, as an institution, believed its soldiers would suffer extreme losses during an invasion of Japan, and all its actions in 1945 were based on that assumption.

My father was one of those soldiers. He served in the then U.S. Army Air Forces as a tail gunner in a B24-Liberator bomber, and his experiences in the war shaped his opinions about the The Bomb. But even he was conflicted. My dad earned the Distinguished Flying Cross for his part in the world's first low-level bombing mission, over the Ploesti refineries in Romania. Of 176 B-24s that set out on the long, grueling and hazardous mission from Benghazi, Libya, 54 bombers were lost. Four hundred and forty fliers were killed, and 220 were captured or went missing.

Those actions included a big jump in Selective Service inductions, expansion of training bases in the United States, and reassignment of soldiers who had fought to liberate Europe.

Jerry Yulsman, Libya, 1943 Click on the thumbnail at right to see a photo of my father standing next to a B-24 in Libya. Those swastikas emblazoned on the side of the plane above the word "Liberandos," show how many Nazi warplanes he and his crew mates had shot down up until that point. As he told the story, after fighting his way from North Africa and up through Italy, he was shipped back to the United States in anticipation of the invasion of Japan. Given U.S. Air superiority, his chances of dying over Japan probably were lower than they were over Ploesti. Even so, he had ample reason to be thankful that the war ended after the Hiroshima and Nagasaki bombings. That's my personal connection to this absolutely horrific event. I sometimes marvel that after Nagasaki, and despite the wide proliferation of nuclear weapons — and the near-misses of the Cold War — we have not seen anything like it again. Now, please see below for images documenting the Hiroshima bombing. Let them be a reminder to us that we should never let anything like this happen again.

U.S. Army poster prepares the public for the invasion of Japan after the end of the war in Europe. (Source: Wikimedia Commons)

The ground crew of the B-29 "Enola Gay," with Col. Paul W. Tibbets, the pilot, in the center. Marianas Islands. (Source: Wikimedia Commons)

An aerial view of Hiroshima before the bombing. (Source: Wikimedia Commons)

An aerial view of Hiroshima after the bombing. (Source: Wikimedia Commons)

An unusual photo of the Hiroshima mushroom cloud taken about 10 km (6.2 mi) east of the detonation point. It was discovered in 2013 in the Honkawa Elementary School. (Source: Wikimedia Commons)

The view of the devastation from the ground in Hiroshima. See the notes from from Paul Tibbets, pilot of the Enola Gay, in the upper right. (Source: Wikimedia Commons)