Oil Spill Update: The President Gets Feisty, the Cleanup Will Take Years 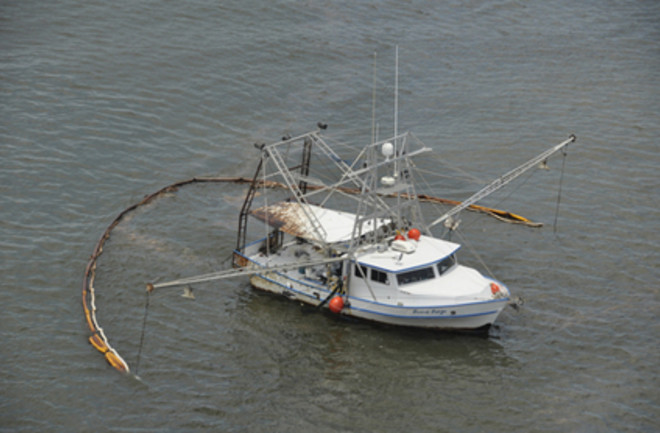 If we're lucky, BP's relief wells will be done in August and the company's all-time blunder will stop leaking. But even it that happens, the Coast Guard now concedes, it will take years to clean up this disaster.

“It’s the breadth and complexity of the disaggregation of the oil” that is now posing the greatest clean-up challenge, the commander, Adm. Thad W. Allen, said at a news conference at the White House [The New York Times].

The oil has now spread 46 miles

from the original site of the Deepwater Horizon explosion, the National Oceanic and Atmospheric Administration now says, and has been found at a depth of more than 3,000 feet. That confirms the wide undersea plumes of oil; BP initially denied

those existed. Admiral Allen said it's time to think of this not as one spill, but rather as hundreds of thousands of little ones. Meanwhile, more oil continues to enter the Gulf. BP says its containment dome is capturing 11,000 barrels a day, though the government's revised estimation of the total flow rate was 12,000 to 25,000 barrels, and the flow would have increased when BP sheared off the top of the riser during the recent operation that put the cap in place.

And as the oil patches flirt with the coastline, slathering some spots and leaving others alone, residents who depend on tourism and fishing are wondering in the here and now how to head off the damage or salvage a season that's nearing its peak [AP].

In those areas where oil has already made landfall, cleanup workers continue to slog away. But at least 75 in Louisiana have grown ill, including fisherman George Jackson.

"They didn't supply us with nothing," says Jackson. "Now they're starting to disperse gloves and hazmat suits." Chemicals and vapors, both from oil and dispersants, can pose serious health risks. They can inflame the nose, throat and lungs, and aggravate asthma. When absorbed in the bloodstream, oil compounds like benzene or toluene can cause headaches and dizziness and could have long term toxic effects on the brain, liver and kidneys after prolonged, direct contact [CBS News].

As all this goes on, President Obama continues to star in his weird rehash of The Queen

. If you haven't seen Helen Mirren's Oscar-winning performance, she played Queen Elizabeth II during the weeks after Princess Diana's death, when the British people demanded their sovereign show some emotion. There has been a similar groundswell in the U.S.—especially among its punditry

—for the Prez to break his legendary cool and show some anger about the spill. This morning he obliged.

"I don't sit around just talking to experts because this is a college seminar," Obama told Matt Lauer. "We talk to these folks because they potentially have the best answers, so I know whose ass to kick" [USA Today].