Oil Now on 65 Miles of Shoreline; BP Will Try a "Top Kill" to Stop the Leak 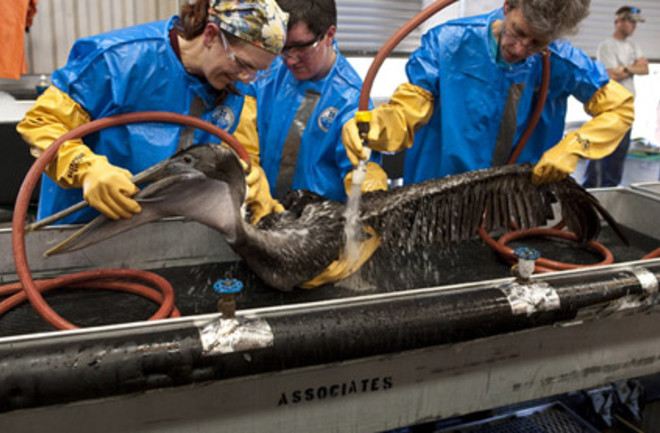 This week BP will try one more time to stop its massive leak in the Gulf of Mexico. The "top kill" plan that was supposed to go into action on Sunday will now commence on Wednesday, the company says.

The process will involve pumping heavy fluids down two three-inch lines placed inside the wellhead. If successful, the fluids will temporarily stop the oil rush, which would then allow operators to seal the opening with cement. The wellhead, officials say, will never be used again for oil drilling [Christian Science Monitor].

, though, a top kill has never been attempted on a leak gushing so far below the surface of the water—5,000 feet. But with BP's other attempts ending in failure, this looks like the best shot the company has to stop the flow in a short term. As BP prepares this operation, the simmering anger at the company has seeped up to the higher levels of the U.S. government. Rear Admiral Mary Landry, who has been coordinating the Coast Guard's response with BP, finally started to sound annoyed with the company's actions—or lack thereof—as 65 miles of American shorelines have now been hit by oil, coating pelicans in Louisiana that were just removed from the endangered species list six months ago.

Landry also criticized BP for allowing some equipment that could aid in efforts to block or clean up the spreading oil slick to sit unused, even as oil is washing up onto the Gulf Coast. "There is really no excuse for not having constant activity," Landry said [New Orleans Times-Picayune].

Other government officials, like Secretary of the Interior Ken Salazar, were more direct:

In a news conference on Sunday outside the BP headquarters in Houston, Mr. Salazar repeated the phrase that the government would keep its “boot on BP’s neck” for results. He also said the company had repeatedly missed deadlines and had not been open with the public. Mr. Salazar added, “If we find they’re not doing what they’re supposed to be doing, we’ll push them out of the way appropriately” [The New York Times].

that the Justice Department is gathering information about the spill, but the White House wouldn't say this weekend whether it intended to open a criminal investigation of BP. In the meantime, anger levels continue to rise as the oil slick gets wider.

On Saturday, the tensions between BP and local authorities came to a boiling point in Jefferson Parish, when local officials declared they were going to commandeer 40 boats of fishermen who had signed up to help with the spill but had since remained idle. They had spotted oil moving past the shoreline beaches through passes into Barataria Bay, which is surrounded by wildlife-rich wetlands [The New York Times].

But what of the EPA demand we covered on Friday

, that BP must find an alternative chemical dispersant and switch within a few days? It seems that wasn't such rigid ultimatum after all. BP replied over the weekend

that no, they'd just as soon keep using the worrisome dispersant they've been using all along. The EPA flipped again and said that it might not force the switch

. Previous Posts on the BP oil spill: 80beats: BP To Switch Dispersants; Will Kevin Costner Save Us All?