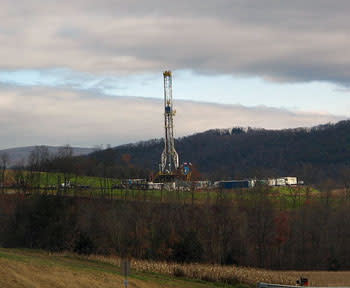 A tower for removing gas at the Marcellus Shale Formation in Pennsylvania.

, the controversial process of extracting shale gas from bedrock by cracking the rock with pressurized water, the gas company responsible stated that it was an extremely unlikely occurrence. True as that may be, residents of Youngstown, Ohio, can now testify that something similar has happened again

. This time, it wasn't the removal of shale gas that triggered the earthquakes, but apparently the subsequent cracking of sandstone in order to store the wastewater produced by fracking. These revelations come from scientists at Columbia University's Lamont-Doherty Earth Observatory (LDEO), who were called in by the Ohio Department of Natural Resources after nine small quakes struck near a wastewater injection site in as many months. They set up seismographs that observed the earthquakes of 2.7 magnitude on Christmas Eve and 4.0 magnitude on New Year's Eve (which caused no injuries and little damage). Mark Fischetti over at Scientific Americanexplains

By triangulating the arrival time of shock waves at the four stations, Armbruster and his colleagues [from LDEO] needed only a day or two to determine with 95 percent certainty that the epicenters of the two holiday quakes were within 100 meters of each other, and within 0.8 kilometer of the injection well. The team also determined that the quakes were caused by slippage along a fault at about the same depth as the injection site, almost three kilometers down.

How would wastewater cause an earthquake? By leaking into a fault and acting as a lubricant, causing a sudden slippage of the rock faces, a process that seems to be behind earthquakes in Arkansas and Texas linked to wastewater injection wells. The company that runs the well, Northstar Disposal Services---owned by D&L Energy

, which operates natural gas drilling operations in Pennsylvania and Ohio---has shut it down in response to requests from Ohio officials, but the team from LDEO says that quakes could continue for up to a year without any further waste being injected.