The VIIRS instrument on the Suomi NPP satellite captured the visible and infrared images of Hurricane Odile that make up this animation. Odile managed to maintain hurricane intensity — with the faint signature of an eye still visible — even after the storm spent several hours crossing the rugged terrain of Baja on September 15, 2014. Now, the remnants of the storm are bringing torrential rains and flooding from Arizona to Texas. (Source: CIMSS Satellite Blog) Heavy downpours from the still-swirling remnants of Hurricane Odile could bring life-threatening floods and mudslides from southeastern Arizona across southern New Mexico and into western Texas and the panhandle through Saturday, according to the National Weather Service. Flooding has already occurred in Arizona — just 10 days after Hurricane Norbert drenched the region, producing a record high single-day rainfall total in Phoenix. This also marks the first time in recorded history that two tropical systems have affected Arizona in such a short period of time, according to the weather service's Tucson office. Color infrared imagery from the GOES-East weather satellite this morning show large amounts of water vapor over the region: 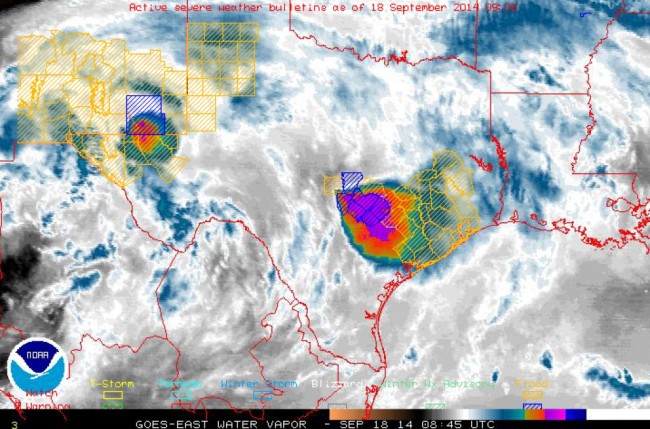 A color infrared image of atmospheric water vapor from the GOES-East weather satellite. Yellow and blue boxes show areas threatened by flooding. (Source: National Weather Service) Two areas of particularly high water vapor levels are visible in the image above. The one in the upper left quadrant marks the center of Odile's remnant circulation over the Arizona-New Mexico border. The bigger area toward the right indicates an area of storminess stretching into southeast Texas, including the Houston area. Tropical moisture from the Gulf of Mexico has been bringing heavy rain to that area for days, and now moisture from Odile is piling on, causing flooding in the streets of Houston this morning. Odile slammed ashore near Cabo San Lucas in Mexico on Monday with estimated winds of 110 knots, tying with Olivia in 1967 as the strongest hurricane to make landfall in Baja California Sur during the modern satellite era. As the animation of visible and infrared satellite images at the top of this post shows, Odile managed to hold together as a hurricane with a visible eye even after moving across the rugged terrain of the Baja Peninsula. Since then, the storm has produced these impressive 24-hour rainfall totals across southern Arizona and New Mexico and east into Texas: 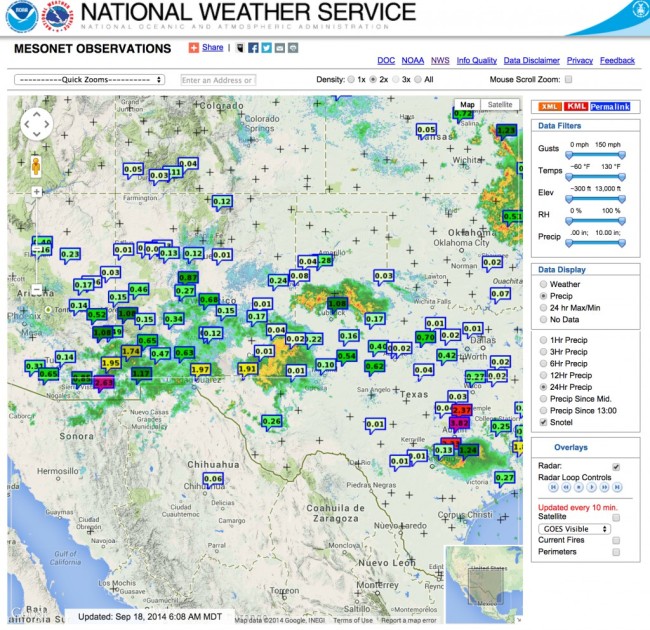 Forecast rainfall totals between Thursday, Sept. 18 and Saturday, Sept. 21. (Source: NOAA Weather Prediction Center) Check out the big splotch of red, orange and magenta colors centered over eastern New Mexico and the Texas Panhandle in this forecast precipitation total map, as well as the one along the Texas Gulf Coast. Over the next 72 hours (as of Thursday, Sept. 18), Odile will evidently be the storm that keeps on giving. And giving. And giving even more.