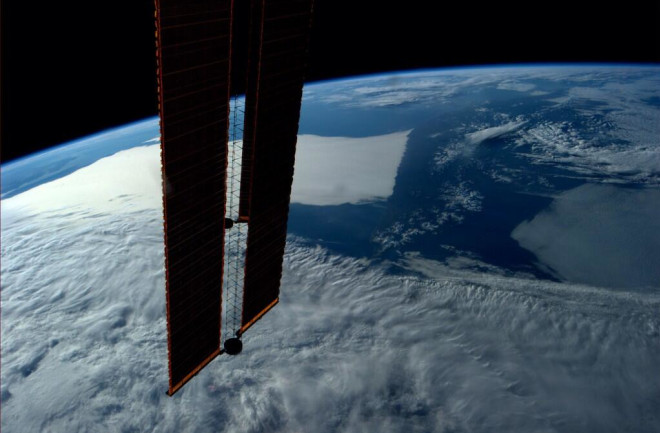 NASA astronaut Reid Wiseman Tweeted this photo he took from the International Space Station today. (The equipment in the foreground are solar panels that provide the station with electricity. Source: NASA/Reid Wiseman) In a Tweet today accompanying the photo above from the International Space Station, astronaut Reid Wiseman had this to say: "Odd square cloud runs into Kamchatka's volcano field." Look for it to the right of the solar panels. What's up with that weird cloud? Here it is again, this time in an image acquired today by NASA's Aqua satellite:

The Kamchatka Peninsula in the Russian Far East, as seen by NASA's Aqua satellite on June 12, 2014. (Source: NASA) From this perspective, the cloud is not really square. Even so, its eastern edge is rather sharply delineated. It runs right up to the coast of the peninsula (which is dotted with volcanoes) — and then just dissipates. Here's a similar example (although not square-ish) along the coast of California:

A deck of low clouds runs right up to the coast of California, as seen in this image from NASA's Terra satellite captured on June 5th, 2014. San Francisco Bay is visible in the upper left quadrant of the image. (Source: NASA) As with today's photo over the Kamchatka Peninsula, these are low-lying marine stratus clouds. But why do they stop at or so close to the coast? These clouds form as winds pick up moist air right above the sea surface and mix it upwards. As the air rises, it cools causing the relative humidity to increase. And when the humidity reaches 100 percent, water vapor condenses into little droplets, forming clouds. With this in mind, it's easy to see why the clouds stop roughly along the coastline. But why aren't the clouds higher? Why the relatively thin deck? The sea cools the air right above it. And since cooler air is denser than warmer air, it tends to remain low and form a relatively thin, stable layer capped by warmer air above it. This is a classic inversion. The bottom of the clouds form at the level at which humidity reaches 100 percent. And the top forms when the rising moist air reaches the cap formed by the inversion. The result: a low-lying deck of clouds over the sea. For a more detailed explanation of how these kinds of clouds form, check out this primer, complete with helpful graphics.