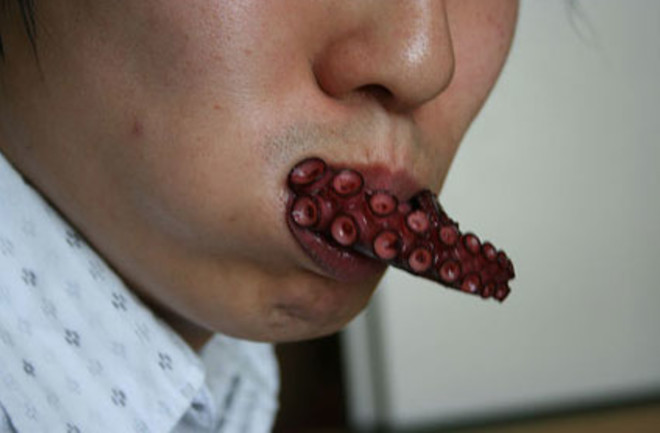 Charges by South Korean health officials that octopus heads contain large and unhealthy amounts of the heavy medal cadmium have sparked a war with the fishermen who profit from the $35 million-a-year trade. Octopus heads are a popular delicacy in South Korea, revered by locals for their health benefits and their supposed role as an aphrodisiac. About 12 million octopuses are sold for eating every year, says the LA Times:

Nakji, a dish featuring baby octopuses, head and all, is a popular snack at sporting events. Another dish, sannakji ("live octopus"), features squirming tentacles dipped in a sesame oil and salt sauce. Enthusiasts have been hospitalized after a wiggling tentacle lodged in the throat.

The Seoul city government tested octopus heads for cadmium and found that the delicacy had dangerously high levels of the toxic metal, almost 15 times higher than the recommended 2 milligram per kilogram limit set by the government. Ingestion of high levels of cadmium can lead to liver and kidney poisoning, and the metal is a known carcinogen. After the findings were announced, the price of octopus fell substantially and turmoil ensued, reports the LA Times

After conducting their own tests, officials from South Korea's Food and Drug Administrationdeclared that it was safe to eat as many as two octopuses a day, heads and all. Emboldened fishermen threatened to sue unless the Seoul government apologized. But city officials refused to back down.

To lower the risk of cadmium poisoning, the government officials recommend that customers remove the internal organs and ink sac of the squirming cephalopods before consuming them, but many people are saying this would remove the delicacy's unique taste. Government officials even sponsored a "Seoul Nakji day" to encourage customers to eat the dish with the heads removed. Im Hyun-ki, an official with an octopus production association in South Jeolla province, told the LA Times

that this just wasn't enough:

"Why sponsor a day promoting Korean octopus if you're not going to eat the best part?" Im said. "It makes no sense and adds salt to the wound."

DISCOVER: Through the Eye of an Octopus

DISCOVER: In the Octopus's Kindergarten

Not Exactly Rocket Science: The mimic octopus (my first ever post)