This animation shows how temperatures are forecast to vary from average for the period starting Monday, October 31 and ending Saturday, Nov. 5. (Images: Climate Reanalyzer. Animation: Tom Yulsman) October has continued a streak of remarkably warm and dry weather across large portions the United States. And as the animation above suggests, the heat, at least, is not likely to relent during the next week. 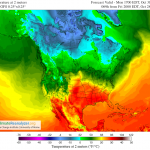 Source: Climate Reanalyzer Halloween will see very warm temperatures across the south and bulging far northward through the nation's midsection — with temperatures as high as 80 degrees F perhaps reaching as far north as South Dakota. (Click on the thumbnail at right for the temperature forecast.) And as my colleague Bob Henson points out in Weather Underground's Category 6 blog, the issue isn't just extraordinarily high temperatures for this time of year. There has also been a lack of autumnal chill at night. For example, as of Friday, October 28, Minneapolis had not yet dipped below 36°F. "In records going back to 1873, the latest Minneapolis has ever gone before seeing its first 35°F of the autumn is November 1, way back in 1931," Henson reports. "The city’s latest first freeze was on Nov. 7, 1900." In fact, a pattern of numerous record-high temperatures, and a dearth of record lows, has been seen all year long. This is helping to put 2016 on track to be at least the second warmest year on record in the United States, according to Henson. 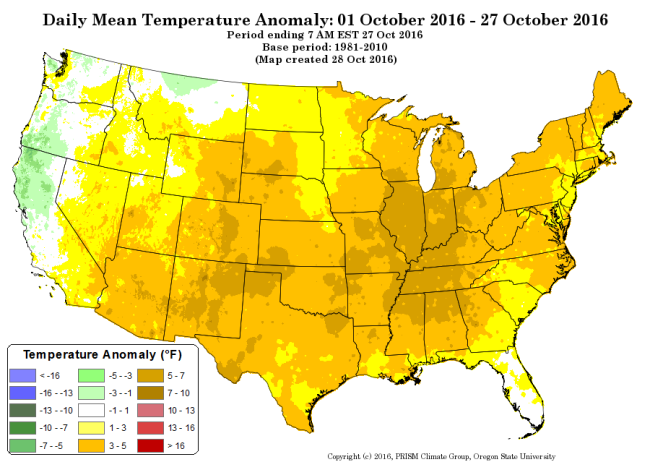 Source: USDA Natural Resources Conservation Service/PRISM The map above shows how daily mean temperatures varied from the long-term average across the United States between October 1st and 27th. The yellow, orange and brown tones show where temperatures were between 1 and 10 degrees F warmer than average. It has also been quite dry across large swaths of the country: 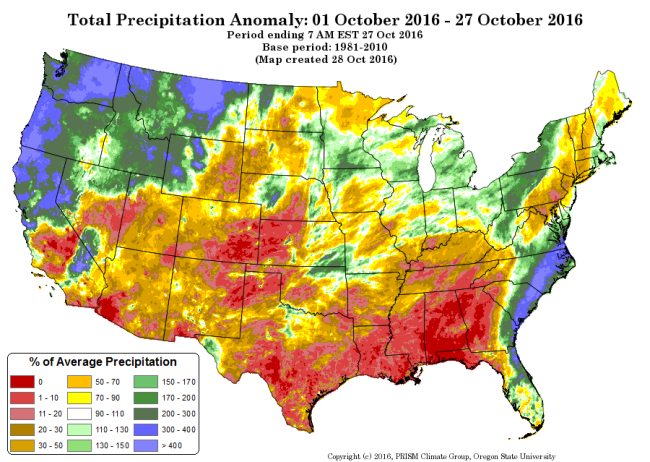 Source: Natural Resources Conservation Service/PRISM Northern California has received some desperately needed drought relief. But large portions of the interior West, the High Plains and the South have seen scant precipitation this month. The same is true of the drought-stricken Northeast. Over the past month, parts of these same regions have moved into drought, or where abnormally dry or drought conditions already existed, the've intensified: 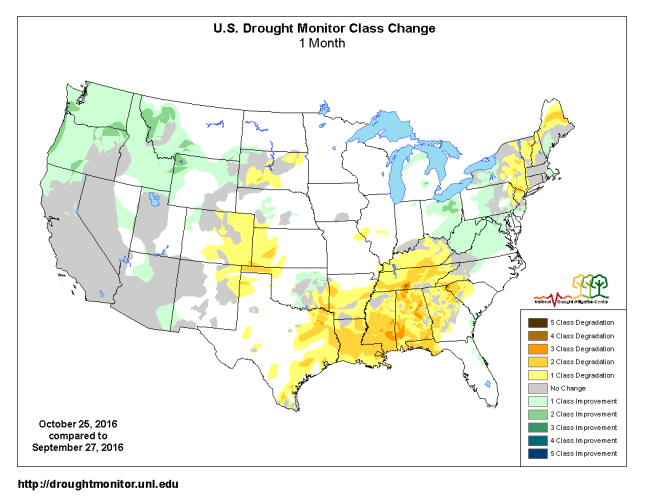 Source: U.S. Drought Monitor There is one piece of good news, however: There is a chance that we're reaching a turning point in California's drought. According to the long-range forecast, atmospheric rivers of moisture combined with a strong Pacific jet stream could bring storms and copious precipitation to California over the next one to three weeks. Fingers crossed!