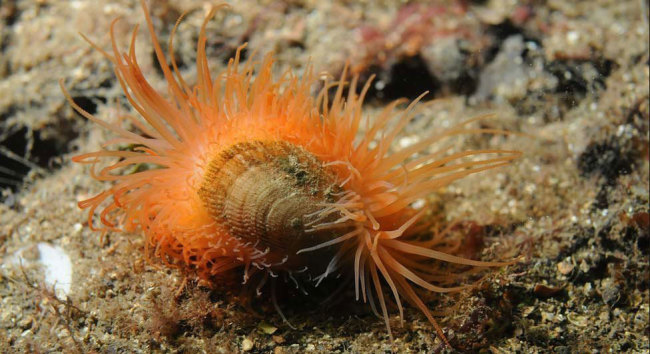 A massive colony of these bad-hair-day shellfish, called flame shells, has been discovered off the coast of Scotland. Its inhabitants are thought to number over 100 million, making it possibly the largest grouping of flame shells in the world. The critters are a species of saltwater clam (Limaria hians), named for the fiery orange tentacles fringing their two half-shells. (To see these tentacles in action, check out this video of a flame shell

propelling itself along the seafloor.) Despite their loud coloration, flame shells are actually pretty hard to find since they build reefs on the seafloor. These reefs, in turn, provide a safe haven for the larvae of many other species, including fish and scallops. The recently discovered colony covers a whopping 185 acres, and was found during the Loch Alsh