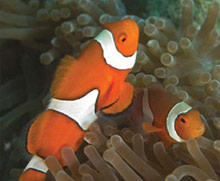 Ocean acidification, the second part of the one-two punch packed by global warming, has been shown to disorient young clown fish and prevent them from finding their way to their natural habitats. A new study found that dropping the pH of seawater interfered with the fish's ability to sniff out environmental cues.

Most research on the environmental impacts of acidification has focused on the vulnerability of shellfish, corals and crustaceans, whose shells are weakened and dissolved by acidic waters. But the latest findings show that fish may also be directly and profoundly affected [Wired News].

A little like the animated movie-star clown fish, Nemo’s real-life counterparts go out to sea upon hatching and some 12 days later must find their way back to a reef to settle down in an anemone home [Science News].

Researchers believe that the fish find their way by following odors in the water. In the new study, published in the Proceedings of the National Academy of Sciences [subscription required], researchers raised clown fish in tanks filled with water of varying pH, and then tested their ability to follow scents.

At a pH of 7.8, the larvae stopped following odour trails released by reefs and anemones. Instead, they homed in on scents they normally avoided, including those released by plants and other organisms which thrive in the wrong kinds of habitat for the fish.... At pH of 7.6, the larvae were unable to follow any kind of odour in the water, and instead swam in random directions [The Guardian].

But it's not yet clear how the more acidic water interferes with the fish's olfactory system. The oceans have absorbed a great deal of carbon dioxide since humans began pumping the greenhouse gas into the air during the Industrial Revolution, and the dissolved carbon dioxide lowers the pH of seawater. The oceans currently have a pH of 8.1, but climate scientists say that could decline to 7.8 by the year 2100 if the carbon dioxide emissions continue unabated. That doesn't bode well for the clown fish, and maybe for many other fish that use odors to navigate, says study coauthor Philip Munday.

The human-induced change is causing pH to decline at a rate more than 100 times faster than at any time in the past 650,000 years, Munday says. "It is unlikely that genetic adaption by most marine organisms, perhaps except those with very rapid generation times, will be able to adapt to keep pace with such a rapid rate of change" [ABC Science].