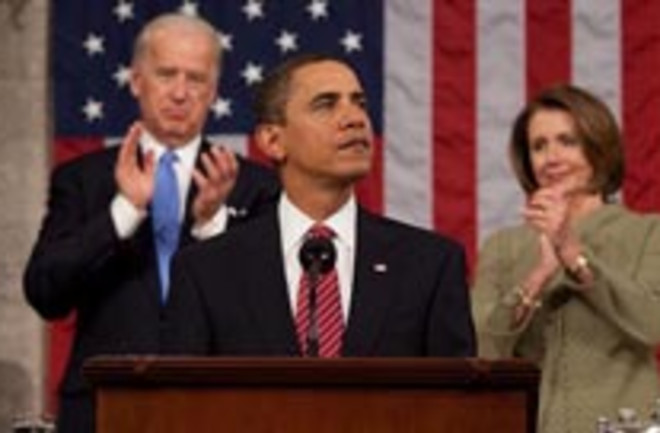 Energy and environmental issues took center stage in President Barack Obama's first speech to a joint session of Congress last night. He asked Congress to send him legislation that would confront global warming by capping carbon dioxide emissions, and emphasized that clean energy technology can help the United States emerge from the recession. Obama said:

"It begins with energy. We know the country that harnesses the power of clean, renewable energy will lead the 21st century.... Well I do not accept a future where the jobs and industries of tomorrow take root beyond our borders—and I know you don’t either. It is time for America to lead again" [The New Republic].

He noted that the stimulus package includes significant investments in alternative energy research and development, as well as money for making buildings more energy efficient and upgrading the electrical grid. He also

pledged to double the use of renewable energy and invest $15 billion dollars in the development of new technologies each year - including wind, solar, advanced biofuels, more fuel-efficient automobiles, and "clean coal" [Grist].

The Republican response to the speech was delivered by Louisiana governor Bobby Jindal, who touched on energy policy as well. He stressed the importance of keeping energy prices down by increasing efficiency, boosting the use of alternative and nuclear energy, and expanding domestic oil and gas drilling. But he disagreed that the federal government should play a significant role in guiding these developments, saying that

"if we unleash the innovative spirit of our citizens, we can achieve energy independence" [Washington Post].

Jindal aroused the ire of some science-focused commentators by critiquing one small part of the stimulus package as an example of "wasteful spending." He said that the bill includes

"$140 million for something called ‘volcano monitoring.’ Instead of monitoring volcanoes, what Congress should be monitoring is the eruption of spending in Washington, DC" [Washington Post],

he said. Some indignant pundits have noted that

the relevant portion of the stimulus money is for "U.S. Geological Survey facilities and equipment, including stream gages [sic], seismic and volcano monitoring systems and national map activities." It seems obvious that employing geologists, building facilities, buying equipment, and paying people to map the country all have a stimulative effect. But more importantly, why does Bobby Jindal think monitoring volcanoes is a bad thing for the government to be doing? [Mother Jones]