But forecast tracks for Noru are literally all over the map, so it's too soon to tell whether the storm will make landfall there

Infrared imagery captured by the Himawari-8 satellite shows Typhoon Noru churning in the Pacific on Monday, July 31, 2017. (Source: RAMM/CIRA Slider) For ten days, Noru meandered aimlessly in the Pacific at no more than Category 1 strength, doing a big lazy do-si-do with a tropical storm but otherwise seemingly going nowhere. By Sunday, Noru had weakened into a tropical storm. But as it wandered southward, it entered an environment with low wind shear plus very warm surface waters at close to 30°C (86°F). And then... KABOOM! Noru exploded — with winds increasing by 90 miles per hour in just 18 hours. That transformed the storm from a wandering weakling into into roaring Super Typhoon with winds swirling at 160 mph. It is our planet's strongest storm of the year so far. 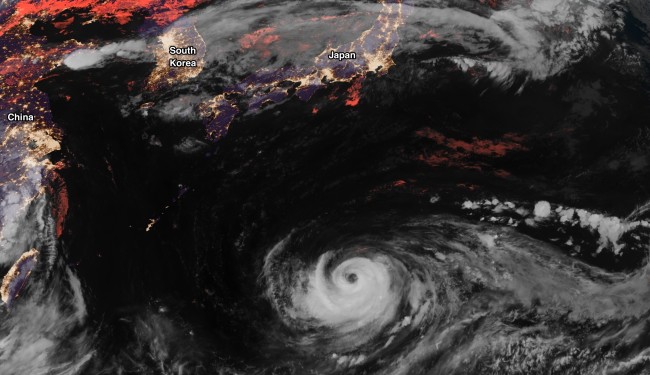 Typhoon Noru, as seen before dawn by the Himawari-8 satellite. (Source: CIRA/RAMMB)

Source: JTWC "What a change," writes Dave Ornauer, of the Star and Stripes Pacific Storm Tracker blog. “What a major, major change.” Since then Noru has weakened enough to lose the "Super" in its name. The latest report from the Joint Typhoon Warning Center pegs Typhoon Noru's maximum sustained winds at about 145 mph, making it a Category 4 storm. What next? Click on the map above to see the storm's predicted track for the next five days. It may look like Noru is taking dead aim on Japan, but actually, the longer-term forecast is unclear. As this Tweet from the Weather Channel's Jonathan Erdman shows, weather models are widely divergent: https://twitter.com/wxjerdman/status/892000443915784192 That said, Noru "could be a major disaster," says Ryan Maue of WeatherBell Models: https://twitter.com/RyanMaue/status/892093042169188355 This one obviously bears watching.