North America is About to Get Its Largest Copper Mine 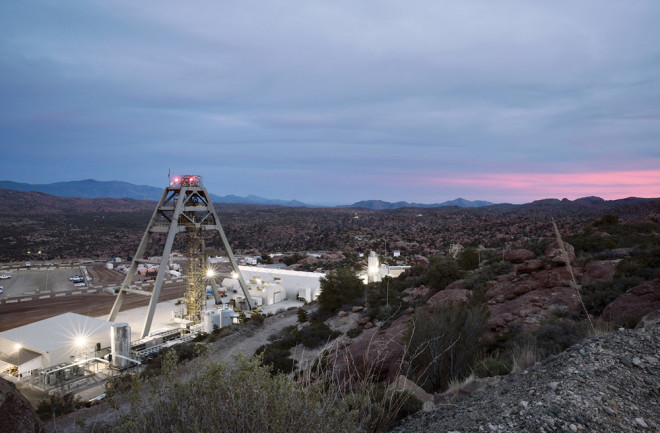 Copper is one of the most valuable metals on the planet. Sure, it lacks the cachet of gold, silver or platinum — those are “precious metals” after all. Yet, without copper, the world as we know it would not operate. If you have electricity, you need copper.

This week, Rio Tinto and BHP Billiton, one of the world’s largest mining companies, were given permission from the U.S. Forest Service to move ahead with the Resolution prospect near Apache Leap in Arizona. This would become the largest copper mine in North America once the mine is operational in the 2020s.

The mine would also be one of the deepest in the world, boring down more than 2 kilometers (7,000 feet). The companies have already invested over $2 billion into the project, so you can imagine how much value the site has for the companies. Politically, it fits with the president’s goal of resource independence as well.

Thing is, copper isn’t really that uncommon on Earth. If you took just the top one kilometer of the planet’s crust and crushed it all up, then sifted out the copper, you’d end up with roughly 1014 tons of copper. That’s over twice the mass of the asteroid Ida (in other words: a lot of copper!)

All that copper is not evenly distributed. The average concentration of copper is only ~50 parts per million. If you wanted to extract that copper from your average chunk of Earth’s crust, and make money doing it, well, you’d be out of luck. Most copper mines need the metal to be concentrated to over a few percent in the average rock of the deposit.

How does that happen? Lots of ways. You can have copper in hot fluids that move around under volcanoes (known as porphyry deposits) or from black smokers on the ocean floor or even in sedimentary rocks. Most of the time, these fluids will cause minerals like chalcopyrite, bornite, chalcocite, covellite and more to form — and they’re all copper rich.

Mine operations at Chuquicamata, one of the largest copper mines on Earth. Use the van in the bottom of the frame for scale. (Credit: Wikimedia Commons)

Those copper deposits where you can make a profit extracting the metal are somewhat rare. Since 2010, the world’s largest copper producer has been Chile, thanks to the abundant porphyry copper in the Andes. Chile produces almost twice as much copper as the number two country, Perú. The other top countries include China, the US, the Democratic Republic of the Congo, Australia, Zambia and Indonesia.

The United States has a long heritage of copper production. Early U.S. copper was mined in Michigan, even before Europeans arrived. Huge deposits in places like Butte, Montana, Bingham, Utah, Yerington, Nevada (which is reopening) and Morenci, Arizona helped drive the electrification of the country. Many of these mines have since closed, but the American Southwest still produces a lot of copper.

Like most geologic resources, copper prices have had their ups and downs. Prices were low during the 1980s, but after a peak of ~$4.40 per pound in 2011, copper is currently selling for ~$2.85 per pound.

So, if you want to open a copper mine in the United States, the higher cost of labor and permitting means you need one that has got lots of the metal. The Resolution prospect in Arizona is just that: a copper deposit that could supply a quarter of the country’s current copper demand.

But mines are also destructive to the environment, especially operations like copper mines. You need a lot of ore to get the copper when only a few percent of the rock is the metal you seek. The most effective way to get the rock is just to dig a big pit or a network of tunnels to get at the richest ore.

This has led to some of the largest man-made features on Earth, like the pits at Chuchiquamata or Collahausi in Chile. Resolution wouldn’t be a new open pit mine because most of the copper lies over 2 kilometers down, but lots of material from the mining would still make it to the surface.

On top of the destruction caused by the mining itself, there are a lot of byproducts from copper mining. With copper comes sulfur — these two elements love each other and most copper minerals used in mining are sulfides. So, when you mine and extract the copper, you get a lot of leftover sulfur that can get into the environment. This sulfur interacts with water to create sulfuric acid … and that leads to acid mine drainage.

The devastated landscape around Ducktown in Tennessee seen in 1939. The barren land was caused by the sulfur released during copper smelting. (Credit: Library of Congress)

Some big copper mines have devastated the surrounding countryside due to acid mine drainage. Ducktown in Tennessee (see above) is a famous site still recovering from copper mining and smelting in the 1900s-60s. The Butte copper pit, once the mine closed, became one of the first Superfund sites thanks to a lake that filled the mine pit with a pH of ~2.5 … so acidic it killed birds that landed on it.

Mining is also dangerous. The depth of the Resolution mine means that the actual mining will happen were the ambient temperature is between 76-82°C (170-180°F)! On top of that, underground mines can collapse like the 2010 accident in the San José mine in Chile, trapping 39 men over 700 meters (2,300 feet) from the surface.

It can be easy to say that all mining is wrong. Yet, in order to live the lifestyles were are accustomed, we need raw materials from Earth. The question becomes: at what cost? Careful consideration of the impact of the mine and the resources that come from it, the recovery of the area after the mine closes and the treatment of the workers is required to make sure we are mining responsibility.

Many times, the dollar signs involved in mining mean that these considerations get ignored or repealed as “government red tape”. The damage that can be done to the environment and communities due to irresponsible mining can be immense. The potential opening of the Resolution prospect should remind all of us that we need to be vigilant about such development — the demand might be there, but unfettered mining can be catastrophic.

More From Discover
Environment
Ongoing Outage of World’s Foremost CO2 Monitoring Site is a “Serious Blow” to Climate Science
Environment
As The Arctic Warms, Beavers Move In
Planet Earth
A New History For The Tropical Forests Of The Americas
Planet Earth
The First Trees May Have Caused Mass Extinctions
The Sciences
The Road To Low-Carbon Concrete
The Sciences
3 Benefits of Sugar You Probably Didn’t Know About
Recommendations From Our Store
My Science ShopDiscover STEM Kits
My Science ShopDiscover 2022 Calendar
My Science ShopStrange Science
My Science ShopElements Flashcards
Shop Now
Stay Curious
Join
Our List