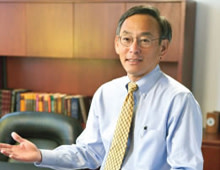 President-elect Barack Obama has thrilled the scientific community with the leaked news that he plans to nominate a Nobel Prize-winning physicist with a passion for green technology for the post of energy secretary. The likely nominee, Steven Chu, currently heads the Lawrence Berkeley National Laboratory, and shared the Nobel in physics in 1997 for developing a method to cool and trap atoms. Recently, however, Chu's interests have shifted away from particle physics and towards finding scientific solutions for global warming. In an interview last year,

Chu said he began to turn his attention to energy and climate change several years ago. "I was following it just as a citizen and getting increasingly alarmed," he said. "Many of our best basic scientists [now] realize that this is getting down to a crisis situation" [Washington Post].

Since he became director of Lawrence Berkeley Lab in 2004 he has focused on making it a world leader in alternative energy research, spearheading research initiatives on solar energy and biofuels. Obama is also expected to nominate Carol Browner, the EPA administrator under President Clinton, as the top White House official on climate and energy policy, and Lisa Jackson, who was until recently was New Jersey’s environmental protection chief, to head the EPA. Along with Chu, these

people will be at the center of Obama administration's energy and environment policy, which aims to reduce greenhouse gas emissions growth and have energy efficiency play an important role in an expected economic stimulus package [CNET].

Despite his broad scientific credentials, even some of Chu's staunchest supporters note that he has little experience inside Washington, and predict that the academic will

get a quick lesson in hardball politics. Good ideas aren’t enough to implement good policies. Neither is being smart. Let’s hope he’s a quick study and disarms lawmakers the way he charms the public [Science News].

Chu won't be able to focus entirely on alternative energy research, as much of the Energy Department's resources are devoted to

maintaining the nation's stockpile of nuclear weapons and weapons research. Nor has he had much involvement in nuclear energy. He has shown little support for building a nuclear waste repository at Yucca Mountain in Nevada, one of the major issues facing the department. Obama also has expressed dislike for the Yucca project [AP].