But even more significant than the warmth was weather and climate mayhem on an epic scale. 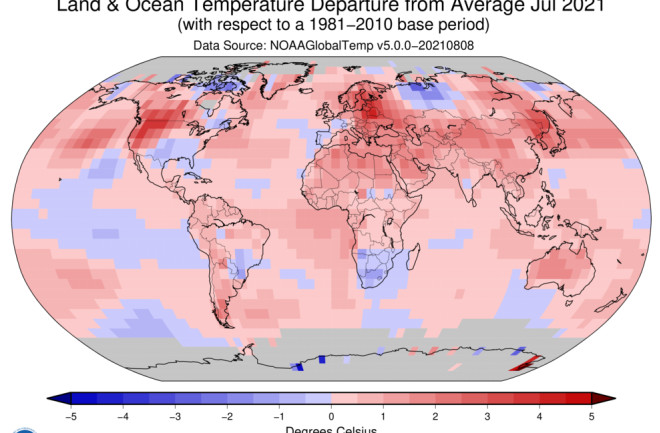 Globally, July was the warmest month in 142 years of record-keeping, according to NOAA. But some parts of the world were much warmer than others. And even during a record-warm month, some areas were cooler than the long-term average. (Credit: NOAA)

Now that mainstream media often gives climate change news prominent coverage (it wasn't always so), you may well have heard that NOAA today declared July the hottest month on record.

“In this case, first place is the worst place to be,” said NOAA Administrator Rick Spinrad in a statement. “July is typically the world’s warmest month of the year, but July 2021 outdid itself as the hottest July and month ever recorded. This new record adds to the disturbing and disruptive path that climate change has set for the globe.”

But it's probably more accurate to say that by NOAA's reckoning, last month was nominally the warmest July in 142 years of record keeping. That's because it was actually just 0.02 degrees F warmer than July 2016, 2019, and 2020, which previously were in a tie for warmest month.

And just for the record, NASA pegs it the second hottest July on record, not the first. But we're really splitting hairs here. It was plenty warm! And it is going to get a lot warmer in coming years.

Meanwhile, a story of arguably equal importance got short shrift: July's weather and climate mayhem. I'm talking about heat waves, droughts, deluges, and freakish floods. Yes, these garnered a lot of press when they happened last month. But NOAA's detailed round-up of July's extreme events is pretty newsworthy — and sobering too.

* All told, floods and landslides killed more than 900 people in July, with greater than 100 flood events across 20 countries, according to NOAA's report. In western Germany and Belgium alone, more than 140 people died.

* Yes, you probably heard about those deadly, town-destroying western European floods. The headlines and disturbing viral videos were hard to miss. But did you know that some areas received more than twice their normal monthly precipitation in just three days? Scientists have long predicted that global warming would result in heavy preciptation events like this. And they have been rise.

* In July, deluges and flooding on an even more epic scale afflicted China. For example, in just six scant hours on July 20th, more than half of a year's worth of rain fell on Zhengzhou, a city in Henan province. We're talking about a staggering 15 inches of rain in less than one work day. And by the end of four days, the area had endured a year's worth of rain — 25 inches.

* To the west, monsoon season hammered India, Nepal, Sudan and Ethiopia with heavy rainfall that triggered deadly flooding. And in Japan, a deluge that brought 10 inches of rain triggered a devastating landslide.

Also in July, but actually unmentioned in the NOAA report, the United States west of the Continental Divide acheived a dubious distinction: By about mid-month, virtually 100 percent of the region had fallen into drought, as determined by a measure known as the Palmer Drought Index. That had never happened before in 122 years of record-keeping.

Luckily, the summer monsoon managed to muscle past stagnant hot and dry weather, delivering desperately needed rain to Arizona and New Mexico. But for the West as a whole, there wasn't much improvement in July — and that remains the case now in the middle of August.

Meanwhile, as I'm writing this on August 13, the dry and hot conditions that have afflicted the West have brought untold misery to millions of Americans, thanks to wildfires and the smoke they've spewed from coast to coast. The statistics from the National Interagency Fire Center tell a dispiriting story, perhaps just as significant as July's global temperature ranking: More than 25,000 wildland firefighters and support personnel are strugglig to contain 103 large fires and complexes that have burned more than 2.4 million acres.

We're not even close to the end of wildfire season (and in California, there really isn't a "season" any longer), yet since the beginning of the year, 40,090 wildfires have burned 3,893,239 acres in the United States.

That's nearly 20 times the size of the land area of New York City.

So, yes, it sure was warm in July. But that's not even remotely close to the whole story.