No Relief in Sight for Storm Battered United Kingdom 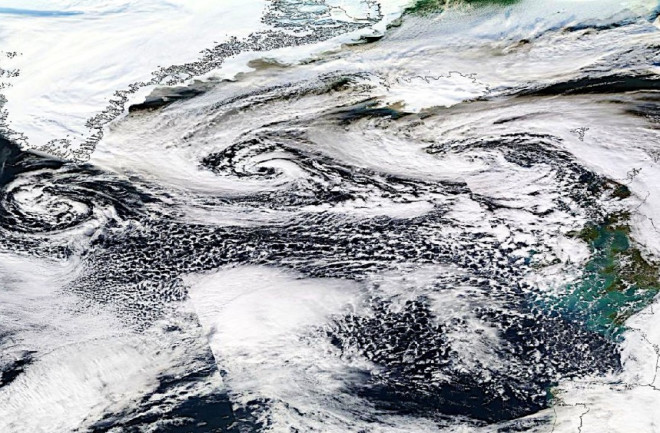 A satellite view shows three strong storms swirling in the North Atlantic west of the United Kingdom. (Source: NASA) With three strong storms lined up off its coast, the United Kingdom will get no relief any time soon from the battering it has been receiving lately. You can see them in the image above captured by NASA's Aqua satellite today. The U.K. is at the extreme right, and Greenland at upper left (distorted in size by the angle of view in this composite of images). While these storms are themselves not forecast to hit the U.K. directly, they are part of a persistent weather pattern that will bring continuing misery to a region that has already received more rainfall than typically falls in an entire winter — record amounts, in fact, for Southeast and South Central England, according to the U.K. Met Office. Here's a quick look at what the next round is forecast to bring on Wednesday:

Source: U.K. Met Office Along with those winds, the storm is forecast to bring high waves along the coast, heavy rainfall, and continued flooding, which has already wrecked havoc. The three storms swirling in the North Atlantic are embedded in an area of copious water vapor:

Source: Space Science and Engineering Center, University of Wisconsin You're looking at a screenshot from the RealEarth web map server of the University of Wisconsin's Space Science and Engineering Center. The image, based on satellite data, shows atmospheric water vapor. I've marked the storm that is forecast to hit the U.K. next. You can also sort of make out the outlines of the three storms featured in the image at the top of the post. Even more misery is forecast to be on the way later in the week.