No (Ear) Bones About It: Acidified Oceans Mess With Fish Physiology 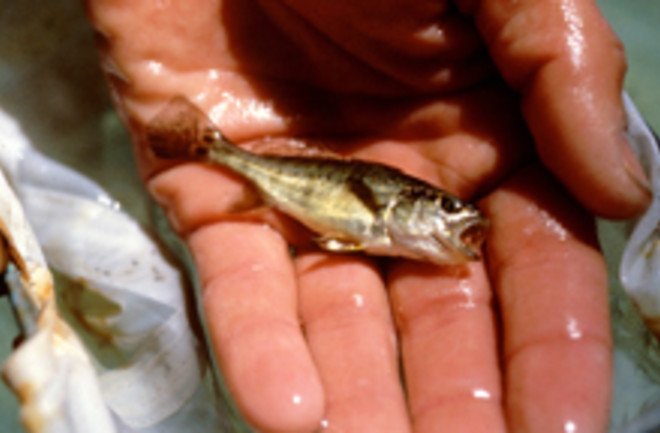 Global warming is expected to cause such alarming climate disruptions that talk of hurricanes and heat waves can overshadow another drastic process at work: Burning fossil fuels and otherwise producing excess carbon dioxide makes oceans and other bodies of water more acidic, as the water absorbs the gas. This acidification can change a fish's physiology in ways that were previously unpredicted and could affect the fish's survival, according to a study in Science. Scientists raised groups of white sea bass in water of varying concentrations of carbon dioxide. They found that the fish in the most highly acidified water had the largest rock-shaped ear bones, known in biology parlance at otoliths. That contradicts what the researchers had hypothesized:

The ear structure in fish, known as an otolith, is made up of minerals. Scientists knew that increasing carbon dioxide in the oceans -- absorbed from the atmosphere -- is making the sea more acidic, which can dissolve and weaken shells. They wondered if it also would reduce the size of the otoliths [Los Angeles Times]. Instead, the ear bones of fish growing in the tank with six times as much carbon dioxide than normal were 15 to 17 percent larger than normal. An

water with a CO2 concentration about 3.5 times higher than current levels yielded fish with otoliths that were 7 to 9 p

ercent larger than those raised in water with today's carbon dioxide levels. That's the CO2 level predicted by the year 2100.

Lead researcher David Checkley says he isn't sure how these mammoth-sized ear bones will affect the fish in the future, but as in humans, fish ears perform a major role in sensing movement and whether the animal is upright -- abilities that are important for survival. "If fish can do just fine or better with larger otoliths, then there's no great concern," Checkley said. "But fish have evolved to have their bodies the way they are. The assumption is that if you tweak them in a certain way it's going to change the dynamics of how the otolith helps the fish stay upright, navigate and survive" [Los Angeles Times]. Scientists have seen that acidified ocean water can have other effects on wildlife, such as making it more difficult for shellfish and coral to form shells. The new findings represent the unpredictable effects that environmental change can have on wildlife.

As researchers contemplate the impacts of accumulating greenhouse gases, their concerns are not restricted to rising temperatures and sea levels and other problems they are pretty sure we can expect. They also worry about impacts, big and small, that no one has thought of [New York Times].