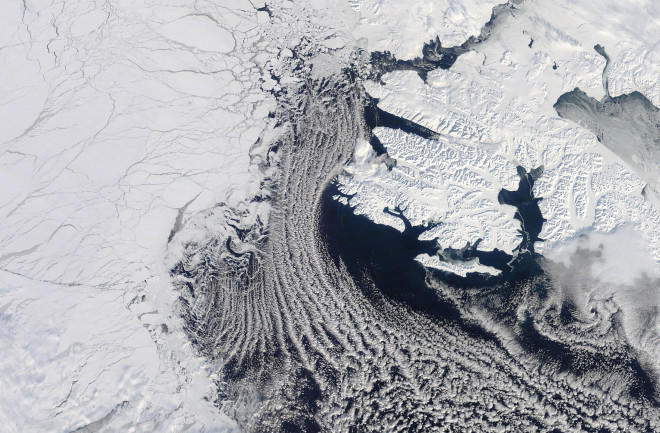 Where Arctic sea ice typically has existed in the past at this time of year, open water is visible in the Fram Strait in this image acquired by NASA's Terra satellite on April 3, 2015. The island of Svalbard is visible in the upper right corner. Greenland is out of the frame toward the lower left. (Source: NASA Worldview) | See update below| The extent of Arctic sea ice in March hit a record low for the month in the satellite era, according to the latest update from the National Snow and Ice Data Center. Back on February 25, a record low winter ice extent was set.

The satellite image above, acquired on April 3, shows dark open water in the Fram Strait between Svalbard and Greenland. At this time of year there is typically more sea ice here. As for those lovely cloud formations, they're called cloud streets, and they tend to form parallel to the direction of the winds.

Source: NSIDC Click on the thumbnail at left to see how the evolution of Arctic sea ice extent this year compares to what happened in 2012, when a record low minimum extent was reached. So far, 2015 is well below that year. But that doesn't mean that a new record low minimum extent will be set this year. We'll have to wait and see. In fact, after Arctic sea ice began shrinking on Feb. 25 — considerably earlier than normal — it experienced a renewed period of growth for awhile during March, largely in the Bering Sea, Davis Strait and around Labrador. But that was not enough to offset the large-scale losses that had already occurred. The culprit has been an unusual pattern of atmospheric circulation during the winter of 2014/2015 that allowed unusually warm air to spill across northern Eurasia, the Bering Sea and Sea of Okhotsk, as well as Alaska and into the western part of the United States. Meanwhile, the same pattern was responsible for the brutal winter conditions that battered the eastern half of the United States this winter. The warmth in the West has had a withering effect on snowpack in the Western United States, as the following map shows.

The black dots indicate a rank of 1, corresponding to the lowest snow water equivalents in the SNOTEL record. (Source: Andrew Slater, NSIDC) The map shows the rank of snow water equivalent measured on April 1 at sites across the western United States. All those black dots are indicative of record low snowpack. April 1 is typically about the time that snowpack in the mountains of the West peaks. As the map makes clear, this year, there was not much of a peak.

SEE ALSO: North of Drought-Plagued California, Snowpack in the Cascades is at Record Lows Too

This could turn out to be a very interesting year — and I don't mean that in a good way. After sputtering and stuttering, El Niño finally has taken hold, and appears to be strengthening. If that continues, it could help to make 2015 quite warm, possibly the warmest on record. It might also help bring desperately needed moisture to California next winter, although that is a long way off and much can happen between now and then. NOAA's Climate Prediction Center should release it's monthly update on El Niño in the next day or so. But already we know that above average sea surface temperatures have expanded into the eastern Pacific Ocean in the tropics during recent weeks — a hallmark of El Niño. Time to fasten our seat belts: Possible weather and climatic turbulence ahead. |Update 4/9/15: The CPC released its update this morning, upping the odds of El Niño continuing through Northern Hemisphere summer to 70 percent, from 50 to 60 percent. Currently, however, El Niño conditions are weak. The CPC also notes this:

...model forecast skill tends to be lower during the Northern Hemisphere spring, which limits the forecast probabilities of El Niño through the year. At this time, there is also considerable uncertainty as to how strong this event may become. |