New Oxygen-Hydrogen Battery Could Be Key to Storing Solar Energy 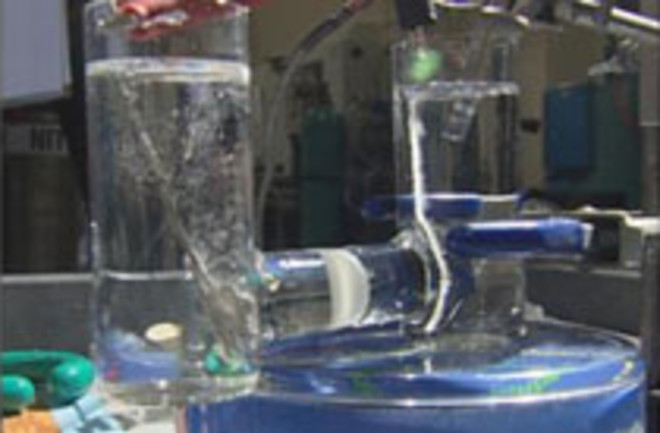 Researchers have come up with a cheap and easy process for storing solar energy, in a finding that could provide one of the final elements for efficient solar power systems: the ability to store excess energy in a battery for use later when the sun isn't shining. Researchers are euphoric about their invention, which could mark a great leap forward in solar technology; previous experimental batteries used to store solar energy have been bulky, expensive and inefficient.

“This is the nirvana of what we’ve been talking about for years,” said [lead researcher Daniel] Nocera in the press release. “Solar power has always been a limited, far-off solution. Now we can seriously think about solar power as unlimited and soon” [Christian Science Monitor].

The new technique involves the standard process of electrolysis, in which a current is run through a liquid and used to split apart its chemical components. In this case, water is broken down into oxygen and hydrogen, which can be stored and recombined to power a hydrogen fuel cell.

Current methods of producing hydrogen and oxygen for fuel cells operate in a highly corrosive environment, Nocera said, meaning the entire reaction must be carried out in an expensive highly-engineered container. But at MIT this week, the reaction was going on in an open glass container about the size of two shot glasses that researchers manipulated with their bare hands, with no heavy safety gloves or goggles [Reuters].

The researchers' breakthrough was the creation of a new catalyst for the electrolysis reaction, using the common elements cobalt and phosphate. The report, published in the journal Science [subscription required], is provoking speculation that the technology could do more than power houses at night; it could also figure into a larger switch to a "hydrogen economy," in which fuel cells could be used as a clean energy source to power everything from cars to factories. Biochemist James Barber says that this work "opens up the door for developing new technologies for energy production, thus reducing our dependence on fossil fuels and addressing the global climate change problem"

. While much more research needs to be done to test the system's economic viability, Nocera says he hopes commercial products will be available within a decade. Image: MIT/National Science Foundation