New Bacterium Is Digesting the Titanic, One Iron Atom at a Time 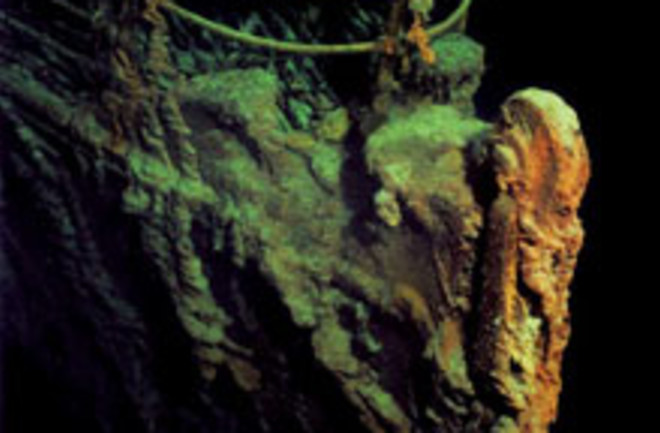 The name Titanic means so many things: the gigantic, disastrous ship; a record-breaking and award-winning movie; and now, a new iron-eating bacterium found in the boat's underwater grave. Says maritime historian Dan Conlin:

"What is fascinating to me is that we tend to have this idea that these wrecks are time capsules frozen in time, when in fact there [are] all kinds of complex ecosystems feeding off them, even at the bottom of that great dark ocean." [Our Amazing Planet]

The new species of bacteria, named Halomonas titanicae, is described in this month's International Journal of Systematic and Evolutionary Biology. The bacteria is slowing eating away at the 50,000 tons of iron in the wreck, which has been under the ocean for 98 years. H. titanicae appears to digest iron and turns it into knobs of corrosion products.

"In 1995, I was predicting that Titanic had another 30 years," Mann said. "But I think it's deteriorating much faster than that now. Perhaps if we get another 15 to 20 years out of it, we're doing good ... eventually there will be nothing left but a rust stain." [Our Amazing Planet]

The researchers believe that the bacteria help create the "rusticles" (so called because they resemble icicles made of rust) that hang down from the ship's hull. The rusticles support a complex ecosystem of 27 different bacteria (including H. titanicae) in their porous structure. As the rusticles grow, detach, and disintegrate, they are gradually recycling the ship.

“We don’t know yet whether this species arrived aboard the RMS Titanic before or after it sank. We also don’t know if these bacteria cause similar damage to offshore oil and gas pipelines,” [authors Bhavleen Kaur and Mann] said. “Finding answers to these questions will not only better our understanding of our oceans, but may also equip us to devise coatings that can prevent similar deterioration to other metal structures.” [press release]

The researchers say the bacteria's iron-munching habits could also be harnessed to help in metal recycling of old ships and oil tankers.

Images: NOAA and the Russian Academy of Sciences