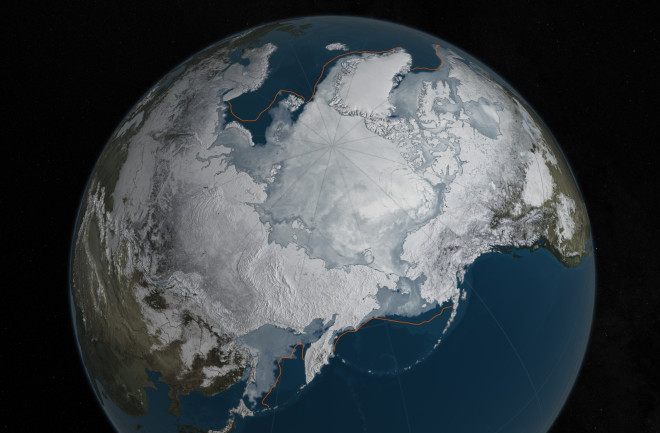 A visualization of Arctic sea ice during March of 2016. The red line marks the long-term average extent of ice. On this date, sea ice reached a record low wintertime maximum extent. It was the second straight year that a record low was set in winter — a highly unusual event. (Source: NASA Goddard's Scientific Visualization Studio/C. Starr) The extent of sea ice globally took major hits during 2016, according to an analysis released yesterday by the National Snow and Ice Data Center. At both poles, "a wave of new record lows were set for both daily and monthly extent," according to the analysis. In recent years, Arctic sea ice has been hit particularly hard. "It has been so crazy up there, not just this autumn and winter, but it's a repeat of last autumn and winter too," says Mark Serreze, director of the NSIDC. In years past, abnormal warmth and record low sea ice extent tended to occur most frequently during the warmer months of the year. But for the past two years, things have gotten really weird in the colder months. In 2015, Serreze says, "you had this amazing heat wave, and you got to the melting point at the North Pole on New Years Eve. And we've had a repeat this autumn and winter — an absurd heat wave, and sea ice at record lows." Lately, the Southern Hemisphere has been getting into the act. "Now, Antarctic sea ice is very, very low," Serreze says. From the NSIDC analysis:

Record low monthly extents were set in the Arctic in January, February, April, May, June, October, and November; and in the Antarctic in November and December.

Put the Arctic and the Antarctic together, and you get his time series of daily global sea ice extent, meaning the Arctic plus Antarctic:

During 2016, the global extent of sea ice tracked below the 1981 to 2010 average. In the graph, the horizontal axis shows the month of the year, aligned with the first day of the month. The vertical axis is the extent of sea ice globally in millions of square kilometers. (Source: NSIDC) As the graph shows, the global extent of sea ice tracked well below the long-term average for all of 2016. The greatest deviation from average occurred in mid-November, when sea ice globally was 1.50 million square miles below average. For comparison, that's an area about 40 percent as large as the entire United States. The low extent of sea ice globally "is a result of largely separate processes in the two hemispheres," according to the NSIDC analysis. For the Arctic, how much might humankind's emissions of greenhouse gases be contributing to the long-term decline of sea ice?

The relationship between September sea ice extent (1953 to 2015) and cumulative CO2 emissions since 1850. Grey diamonds represent individual satellite data values; circles are pre-satellite era values; the solid red line shows the 30-year running average. The dotted red line indicates a linear relationship of 3 square meters per metric ton of CO2. (Source: D. Notz, Max Planck Institute for Meteorology via NSIDC) The graph above, based on data from a study published in the journal Science, "links Arctic sea ice loss to cumulative CO2emissions in the atmosphere through a simple linear relationship," according to an analysis released by the NSIDC last December. Based on observations from the satellite and pre-satellite era since 1953, as well as climate models, the study found a linear relationship of 3 square meters of sea ice lost per metric ton of CO2 added to the atmosphere. That's over the long run. But over a shorter period of time, what can be said? Specifically, how much of the extreme warmth and retraction of sea ice that has been observed in autumn and winter of both 2015 and 2016 can be attributed to humankind's emissions of greenhouse gases? "We're working on it," Serreze says. "Maybe these are just extreme random events. But I have been looking at the Arctic since 1982, and I have never seen anything like this."