It took humans until the 20^th century to build a nuclear reactor. Mother Nature, on the other hand, built one that turned itself off and on, stored its waste, never threatened a meltdown—and did it 2 billion years ago. 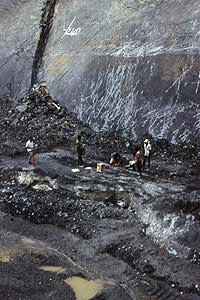 Physicists analyzing a tiny sample of this ancient georeactor—discovered in the African country of Gabon in 1972—have now determined how it worked. Alexander Meshik at Washington University in Saint Louis and his colleagues conclude that river water trickling into uranium-rich bedrock acted like the control rods in a modern reactor, increasing the efficiency of fission and causing the uranium to produce a chain reaction. The reaction released heat that boiled the water. Once all the water was gone, the fission fizzled out, preventing a meltdown. Gradually, more water trickled in and the process started anew.

By analyzing how xenon (a radioactive by-product of the reaction) was trapped in the rock as it periodically cooled, Meshik’s team could measure the timing of this ancient nuclear cycle. For 150 million years the reactor switched on for 30 minutes every couple of hours or so. “What’s amazing is that it was exactly 30 minutes—not 25, not 35,” Meshik says. Grains of a natural compound called alumophosphate had sequestered the xenon waste for eons without leaks. Eventually so much of the original uranium decayed that the reactor shut down for good. The whole process confirms that the laws of nuclear physics worked just the same 2 billion years ago as they do today. Now we just need to match nature’s finesse.