NASA Plans to Grow First Plants on the Moon 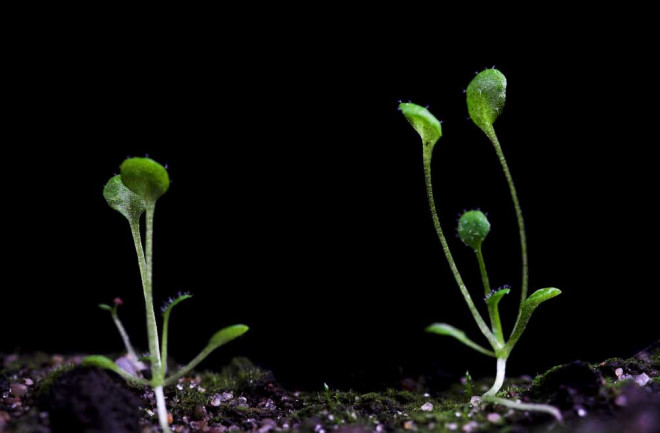 Arabidopsis plants like those that will (fingers crossed) grow on the moon. Photo credit: Vasiliy Koval/Shutterstock

The U.S. may not have plans to return astronauts to the moon anytime soon, but that doesn’t mean other lifeforms won’t grace the lunar surface. NASA is teaming up with students and private space companies to grow the first plants on the moon’s surface starting in 2015.

The self-contained Lunar Plant Growth Habitat will resemble a glorified coffee can and will contain enough water, nutrients and air to grow 10 turnip seeds, 10 basil seeds, and 100 arabidopsis seeds (this plant is the lab-rat of the botany world).

As reported in Forbes,

This experiment will test whether plants can survive radiation, flourish in partial gravity, and thrive in a small, controlled environment – the same obstacles that we will need to overcome in order to build a greenhouse on the Moon, or create life on Mars.

If the seeds successfully germinate, they will be the first Earth plant life transported to another planetary body. Pete Worden, director of NASA’s Ames Research Center, where the team is based, told Forbes,

“The first picture of a plant growing on another world – that picture will live forever.  It will be as iconic as the first footprint on the moon.”

This 3D-printed model of the plant habitat will include cameras, sensors, micro fluidics system, and a seed module needed to sustain life on another world. Photo credit: Hemil Modi.

This 3D-printed model of the plant habitat will include cameras, sensors, micro fluidics system, and a seed module needed to sustain life on another world. Photo credit: Hemil Modi.

When the mini-habitat lands on the moon, the fancy can will automatically release enough water to wet a piece of nutrient-laden filter paper. That, along with the natural sunlight on the moon, should trigger the germination of the plants. Since it’s sealed, the container will only have enough air for about a week, but that’s enough to see if the seeds germinate successfully.

The souped-up can will also be equipped with dozens of cameras and sensors that will enable scientists back on Earth to watch and record the growing process and see how well the plants regulate their temperature and water supply.

Controls in the Classroom

To see how these same aluminum greenhouses perform in “normal” terrestrial conditions, the team plans to send additional cans to classrooms across the country.

In a brilliant mix of creativity and frugality, NASA will send schools their own set of habitats so they can grow the same plants that are being sent to the Moon. The reasons for this are two fold.

First, every experiment needs a control, and instead of spending the money to duplicate the experiment multiple times, they can crowdsource it… Second, it allows children to be part of the moment – to not just watch from afar, but to gain experience and knowledge by actively participating.

Fly Me to the Moon

The team plans to hitchhike on the robotic spacecraft of whichever private company wins the Google Lunar X Prize, saving millions of dollars in travel costs. According to one expert’s estimates, this mission would have cost about $300 million twenty years ago; the current price tag rings up at a mere $2 million. Not bad for an experiment that could help us figure out how to sustain life on other planets—or in a future version of our own.