NASA: Last Month Was the Warmest June on Record. Will July Break The Record Again? 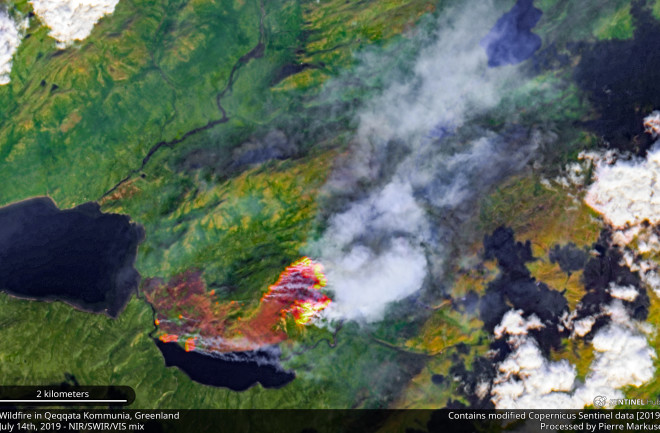 Satellite image of a wildfire blazing in in the Qeqqata Kommunia of western Greenland. The image consists of data acquired by a Sentinel satellite on July 14th, 2019 in the infrared and visible parts of the electromagnetic spectrum. (Credit: Copernicus Sentinel Data processed by Pierre Markuse)

Last month has gone into the books as the warmest June on record, beating out 2016 by a comfortable margin, according to the latest global analysis by NASA.

Now, more than half way through July, conditions haven’t really cooled off. That’s probably not breaking news to you if you happen to live in the two-thirds of the United States stretching from the central to eastern United States. The region is now stifling under a dangerous summer heat wave expected to cause dozens of records to fall.

Meanwhile, in western Greenland, record high temperatures have been implicated in a very unusual wildfire, seen in the satellite image at the top of this story.

“It occurred near a hut on the Arctic Circle Trail and was likely started accidentally by a hiker,” according to a story at NASA’s Earth Observatory site. “Warm, dry weather helped set the stage for the fire. Meteorological data shows the region has been unusually hot and dry in recent months. And it was particularly warm the day that the fire burned.”

The Greenland blaze is not an isolated phenomenon. As Andrew Freedman reports in the Washington Post:

. . . the Greenland fire fits a broader pattern that is raising alarms in the climate science community. According to the Copernicus Atmosphere Monitoring Service (CAMS), the European science organization tracked more than 100 ‘intense and long-lived wildfires’ above the Arctic Circle since June. Calculations show these fires emitted enough carbon dioxide to be the equivalent of Sweden’s total annual emissions.

Globally, this month is on track to take the title as warmest July on record. Since July naturally is the warmest month the year, that would make this month the warmest ever observed with instruments.

But a caveat is in order: There is uncertainty in how conditions will evolve over the remainder of the month.

How is 2019 likely to turn out overall? Although it has been unusually warm, Gavin Schmidt, director of the NASA institute that tracks global temperatures, says it is unlikely to enter the record books as the warmest year.

In a recent Tweet, Schmidt — head of the NASA Goddard Institute for Space Studies — offered these projections:

One thing is for certain: the long-term rise in global temperatures resulting from our emissions of heat-trapping greenhouse gases continues, along with resulting climatic impacts like more extreme rainfall, catastrophic flooding, melting ice sheets, and rising sea levels.