NASA: Last Month Was Earth’s Warmest May on Record

Particularly intense warmth in Siberia this spring may have awakened ‘zombie’ fires, portending a brutal summer ahead. 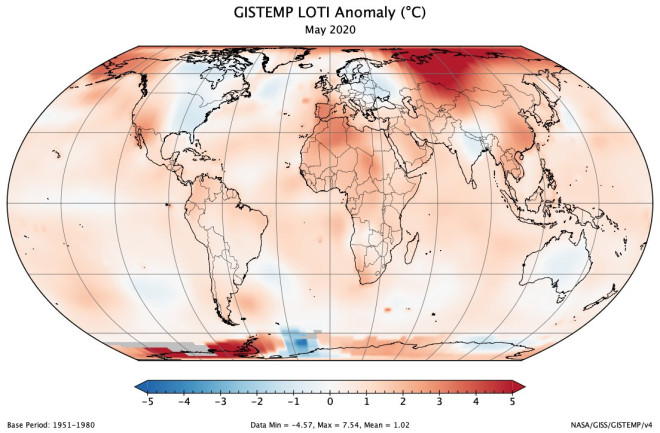 Abnormal warmth dominated the globe in May, making it the warmest such month on record, according to NASA. (Credit: NASA GISS via Twitter)

Last month has entered the books as the warmest May in records stretching back to 1880, according to NASA's monthly analysis of global temperatures, published today.

By NASA's reckoning, our planet was a little more 1.8 degrees warmer in May than the long-term average for the month.

With NASA's verdict today, two out of three independent analyses show the globe experiencing record warmth in May. The other was published earlier this month by Europe’s Copernicus Climate Change Service.

A third analysis, released today by the National Oceanic and Atmospheric Administration, shows last month in a tie with May 2016 for warmest such month. The difference between NOAA’s and NASA’s findings is small — just a tenth of a degree.

May 2020 marked the 44th consecutive May (as well as the 425th consecutive month overall) with temperatures at least nominally above the 20th-century average, according to NOAA. (Credit: NOAA)

The variance between NASA’s and NOAA’s findings probably is due to the different methods used by the two agencies. NOAA scientists use much of the same raw temperature data, but they employ a different method to estimate temperature in the polar regions and other areas where observations are spotty.

“We continue to warm on the long term and in any given month we’re likely to be knocking on the door, close to a record in the era that we’re in,” NOAA climate monitoring chief Deke Arndt told The Associated Press.

As seen in this map of temperature anomalies from NOAA’s report, Australia, parts of Europe, the eastern half of North America and a few other areas of the globe were actually cooler than average in May. But most of Earth was unusually warm — especially a large portion of Russia, with intense, record-setting warmth focused in Siberia.

It has been that way for a while now, reports Robert Rohde of Berkeley Earth, which conducts independent climate analyses. “January to April, Russia averaged nearly +6.0 (degrees Celsius) [+11 (degrees Fahrenheit)] above historical norms,” he wrote recently on Twitter. “That’s one hell of a ‘mild winter.’ That’s not only a new record anomaly for Russia. That’s the largest January-to-April anomaly ever seen in any country’s national average.”

The unusual warmth in Siberia may be spurring what scientists have dubbed “zombie” fires. These arise from blazes that burn deep into the soil the previous year and continue to smolder underneath the winter snows.

Wildfires blazing in Russia’s Sakha Republic within the Arctic Circle are seen in this image produced with data acquired by the Sentinel 2 satellite on May 29, 2020. The image covers an area of about 11 miles across. (Credit: Modified Copernicus Sentinel data processed by Pierre Markuse)

The satellite image above shows wildfires blazing at the end of May in the Siberian Arctic. Look carefully at some of the lakes. Yes, that ice cover! The juxtaposition with the flames is particularly striking.

Many of Siberia’s spring 2020 wildfires are blazing in areas that burned last summer. In fact, Siberia saw a devastating outbreak of large wildfires last year. And the Arctic Circle regions most affected by the fires in 2019 “were experiencing warmer and drier surface conditions, providing the ideal environment for fires to burn and persist,” says Mark Parrington, a senior scientist and wildfire expert with the Copernicus Atmosphere Monitoring Service.

A wildfire burning near frozen lakes in Russia’s Sakha Republic above the Arctic Circle, as seen by the Sentinel 2 satellite on May 28, 2020. (Credit: Modified Copernicus Sentinel data processed by Pierre Markuse)

“We have seen satellite observations of active fires that hint that ‘zombie’ fires might have reignited, yet it has not been confirmed by ground measurements,” Parrington says. “The anomalies are quite widespread in areas that were burning last summer. If this is the case, then, under certain environmental conditions, we may see a cumulative effect of last year’s fire season in the Arctic which will feed into the upcoming season and could lead to large-scale and long-term fires across the same region once again.”

The Year So Far — and What’s to Come

For the globe overall, NASA data show that winter and spring (December 2019 through May 2020) experienced the second-warmest surface temperatures in the 141-year record.

Similarly, NOAA shows January through May as being the second-warmest such period.

Looking ahead, it’s pretty much a lock that 2020 will rank among the five warmest years on record globally, with NOAA scientists calculating a 99.9 percent chance of that happening. And it’s a pretty good bet that 2020 will go down as one of the two hottest years since 1880.

For most of the U.S., summer is likely to be unusually warm — as the outlook map above shows. This is particularly sobering news for the Western U.S., much of which is already experiencing moderate to extreme drought, thanks in part to warm temperatures causing rapid melting of mountain snowpack and drying of soils.

The anomalous warmth, combined with continuing drought, are forecast to bring a heightened risk of wildfires to the region through August.