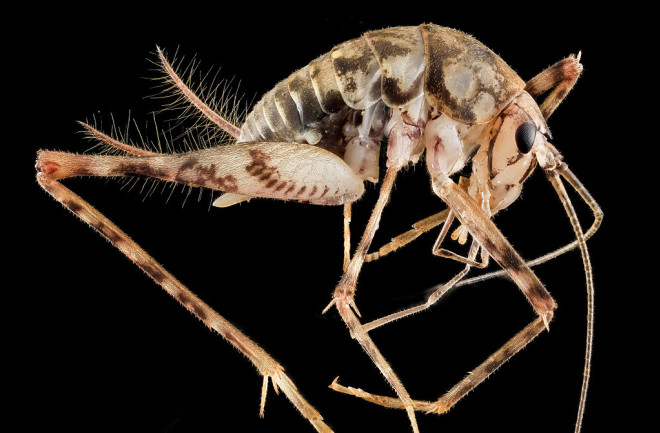 Editor's Note: This is a guest post by Khishaana Johnson, describing a recently published study about Asian camel crickets that was aided by the efforts of citizen scientists across the country in the Camel Cricket Census a part of the Your Wild Life project. Khishaana is a graduate student in the Professional Writing certificate program at North Carolina State University.

In 1898, a biologist named S.H. Scudder reported a bizarre striped insect with a large humped back that had been sent to him from a Minnesota greenhouse. He declared it the greenhouse camel cricket, a pest, and then the critter was lost from the archives for over a century. Holly Menninger, an entomologist at North Carolina State University, was part of a triumvirate of scientists that uncovered the species creeping into North American homes, quiet and undetected. She gestures at the boxes of camel cricket corpses stacked at her feet and apologizes for the smell. “These giant crickets managed to invade our homes with no one really noticing. Which is kind of crazy,” Menninger says. “They don’t bite. They don’t sing. They don’t sting.”  They do have a proclivity for jumping towards people, rather than away, and are likely scavengers, feeding on their own dead, fungi and mold or pet food, says Menninger. They can also be in large quantities. “I’ve seen places with just a couple, others with tens and then some photos where there are hundreds,” says Menninger. Menninger recounts her graduate student days when the large critters infested her own basement. The researchers' efforts were helped by citizen scientists who went to their basements and cellars to take photos of camel crickets or collect specimens to submit to the Camel Cricket Census. Photos from Massachusetts, Pennsylvania and New Jersey also revealed a second Asian camel cricket species with a spider-like appearance, Diestrammena japanica. There’s not a single specimen of the second non-native species in any collection in North America, according to Menninger who is the Director of Public Science at Your Wild Life, a citizen science and outreach program at NC State that runs the Cricket Census. The results of the research were recently published in the journal PeerJ [1]. “It was certainly exciting to find that we had two species on our hands,” says Mary Jane Epps, lead author of the study and identifier of the second species. “This involved a lot of going through older literature on the Diestrammena genus and really sifting through to identify the key morphological features.” Professional scientists and citizen scientists have given the creatures many names since discovering them in their homes and basements: camel cricket, cave cricket, unidentified spidery-thing, two-antennae’d striped monster. The reports have mostly been coming in from the East Coast, where the skinny and stripy greenhouse camel cricket is in much stronger numbers than a meaty and mottled native species, but nobody knows why right now.

Got a cricket? The Camel Cricket Census, a citizen science effort from Your Wild Life (Image Credit: yourwildlife.org) Menninger thinks the greenhouse camel cricket could be outcompeting the native species and pushing the native species out. Or, she says, the native species could be transient or the greenhouse camel cricket could be really good at living in houses, and it’s exploiting the new niche. And, Menninger says, how they got here is also a mystery. “It is clear that somehow it came from Asia, it was in greenhouses and then it sort of moved from greenhouses into people’s houses. And how that happened –we’re trying to figure out,” says Menninger. However it happened, Menninger says that she’s hesitant to call the Asian camel cricket invasive because while it’s a foreigner, it seems to be relatively harmless. There’s been no observable damage to homes, environments, or other creatures. As far as Menninger can tell, the crickets have been good neighbors. Of course, not everyone sees a massive cricket that way. But at least the citizen scientists working with Menninger have found a positive outlet for their emotions. “Some people are scared of them but they suck it up and they turn that fear into something that can be of public value,” says Menninger. “There are other people that are motivated to participate because they feel like they have suffered this plague,” says Menninger, “And so they like commiserate with their fellow cricket-home occupiers.” And, Menninger says, it gives people an opportunity to discover something new. “We’re always amazed, and we’re motivated to study things that are right under our noses.” ***