My Wired Feature on Geoengineering 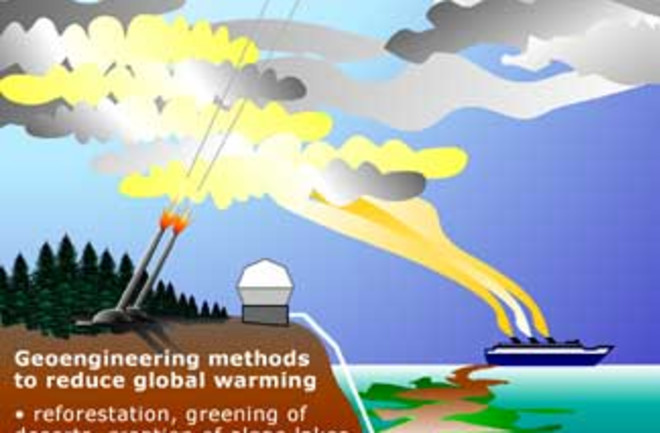 The latest issue of Wired is now on newsstands, though not yet online. In it, I have a lengthy feature story about the scientific mainstreaming of geoengineering, which has occurred because of several trends:

1. Global warming seems to be moving even faster than scientists originally expected.

2. Political solutions seem to be evolving even more slowly than many pessimists would have expected.

3. One geoengineering idea--putting reflective particles in the stratosphere--is outdistancing all the other proposals and has become a clear, and apparently affordable, front-runner.

4. With possible climate catastrophes looming, a little extra stratospheric sulfur seems more and more of a tolerable outcome, environmental consequences notwithstanding. What would you prefer--a wrecked planet, or only a somewhat messed up one? Accordingly, scientific minds are opening up to geoengineering as a real possibility--and especially as a last ditch "emergency response" measure to have on tap in case we reach the point where it's clear that, say, we'll lose Greenland if we don't act fast. In this context, I build my Wired story around Stanford ecologist Ken Caldeira, an intriguing character because he's a big time environmental lefty--but, at the same time, has become increasingly interested in geoengineering, for the reasons mentioned above. Indeed, these trends have begun to collapse the distance between left and right on the issue, a clear indicator of mainstreaming. I'll include some passages from the story in later posts--and will try to blog any reactions that emerge....