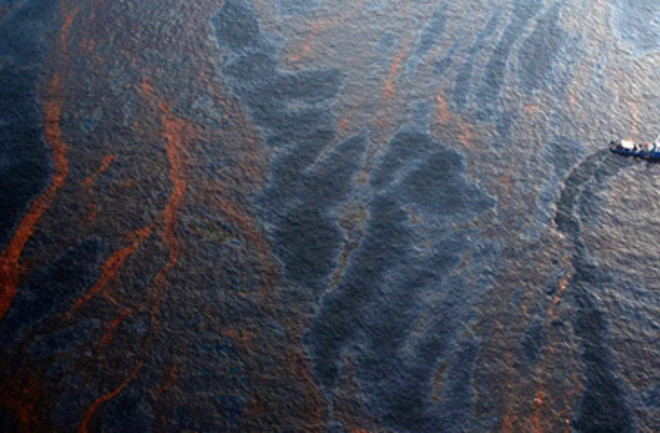 The BP oil spill isn't over. But, as CNN says, we could be at the beginning of the end. The first part of BP's "static kill," in which it used mud to try to plug the leak, appears to have worked well and stemmed the flow of oil. Last night National Incident Commander Thad Allen gave the OK for the second part: pumping concrete. That could begin today.

BP's "static kill" operation finished ahead of schedule. It took eight hours to fill the 13,000-foot well pipe with heavy drill mud, holding back the oil with its weight. ... Now, the column of mud ensures that oil will never be released from the well again, officials say. A permanent cement plug will be put in place later this month [ABC News].

This business of pumping mud probably sounds familiar. That's because it's basically the same thing BP tried to do many weeks ago with its "top kill

" maneuver. This time, though, the mud seems to be working, probably because the temporary cap BP put on the leak in July made it easier to smother the oil flow. Hopefully their optimism isn't misplaced, but it's nice to see some hope on the horizon. While BP continues work on this plug, the relief wells near their target. They should intersect the well sometime later this month. Now more attention turns to the other side of the disaster—cleaning it up. This week the U.S. government issued a report that sounded like good news, that it has accounted for most of the reported 5 million barrels of oil from the leak. Not everyone, though, was convinced by this rosy declaration.

The government was met with skepticism about its report that three-quarters of the oil from the well had evaporated, or had been removed in controlled burns, collected or dispersed. Critics accused the panel of government, industry and academic scientists who authored the report of being at best vague about how it reached its conclusions and at worst deliberately downplaying the environmental impact of the biggest oil spill in U.S. history [Houston Chronicle].

, getting accurate figures is tricky. The first few guesses of the amount of oil leaking per day were wildly underestimated

that the government's announcement is based on more guesswork, not direct measurement. Related Content: 80beats: BP Prepares for "Static Kill" Operation To Permanently Seal Leaking Well