Move over record-setting warmth: A brutal blast of winter misery straight out of the Arctic appears to be on its way

But up in the Arctic, the ironic forecast is for unusual warmth. What's up with this weird pattern of a warm Arctic with cold continents? 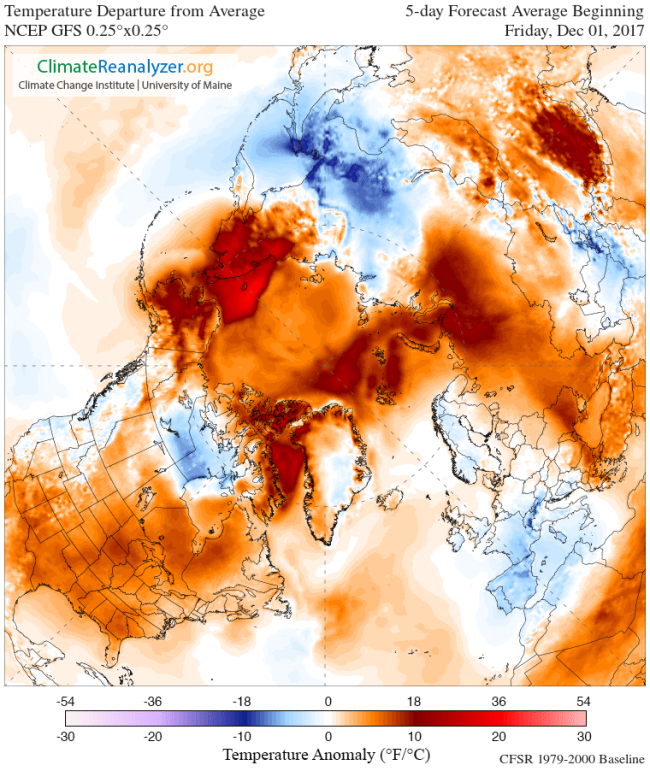 Average forecast temperature anomalies for today through Dec. 5, 2017. (Source: Climate Reanalyzer/University of Maine) Lately, I've been wondering what happened to winter. And my guess is that I'm not alone. I live along the Front Range of Colorado, and we've been luxuriating in very unusual warmth for this time of year. In fact, Denver reached 81 degrees on Monday. This set the record not just for the high temperature on that particular day but for the entire month of November. Us Front Rangers have not been alone. During the last 30 days, 2,959 record high temperatures have been set across the United States, versus just 880 record lows. (Go here for the latest stats, which change daily.) The warmth will likely hang around for a little while longer — as the map above shows. But if you live in the eastern half of the United States, you might soon have to put away those shorts and flip-flops, and break out the winter gear. That's because a significant change is in the wind. Literally.

The probabilities for above and below average temperatures between Dec. 8th and 14th, 2017. (Source: NOAA) A brutal Arctic blast is now forecast to plunge into the Midwest and eastern United States some time around December 10th. Western Europe and eastern Asia are also expected to be thrust into a deep freeze. As Andrew Freedman puts it in a story at Mashable:

Computer model projections show an Arctic air mass diving southeastward, into the U.S., by Dec. 10, and potentially setting up shop for one to two weeks. Daytime highs will be at least 15 to 20 degrees Fahrenheit below average for this time of year, with the heart of the cold projected to be centered somewhere near the Ohio Valley.

The immediate culprit will be a wavy jet stream, and a stubborn high pressure ridge centered over Greenland. If this is what happens, much of the Arctic, which has already been experiencing unusual warmth, will continue to experience higher than normal temperatures for this time of year. Meanwhile, the flip side is frigid Arctic air spilling southward. https://twitter.com/WSF2018/status/779236633241645056 You can see this kind of pattern in the map above. The dark wavy line traces the edge of the Northern Hemisphere's polar vortex — the pool of cold, Arctic air that's ordinarily centered over the North Pole. That word 'vortex' refers to the counter-clockwise winds that help keep the cold air bottled up in the high north. A wavy jet stream can cause the vortex to weaken and develop big lobes. Northward thrusting lobes can suck warm air up from the south. Meanwhile, southward thrusting ones allow cold, Arctic air to pour into lower latitudes. Scientists have a name for this pattern: "warm Arctic/cold continents." https://twitter.com/judah47/status/935625470401445895 You can see the warm Arctic/cold continents pattern in the forecast above for mid-December. Judah Cohen, Director of Seasonal Forecasting at AER (and author of the Tweet above), argues that human-caused warmth in the Arctic, amplified by sea ice loss, is associated with this weird pattern. In other words, the warmth in the north, for which we are largely to blame, is ironically tied to outbreaks of severe wintry weather farther south. The scientific details get pretty complicated, so I'll pass on describing those today. (You can find them for yourself here.) There is very little doubt that human-caused warming in the Arctic is being amplified by the loss of sea ice. (The National Snow and Ice Data Center has a good explanation of this here.) But some researchers take exception to Cohen's theory that the outbreaks of cold air farther south are tied to Arctic warming. Based on some recent research, they say the outbreaks are simply the result of the chaotic variability of the climate system. Still others argue that these two perspectives do not have to be mutually exclusive. Writing in the journal Science last year, meteorologist Theodore G. Shepherd of the University of Reading in the U.K. argues that "it is possible that variability and the forced response to climate change act together to affect extreme weather." While scientists continue to seek explanations for what causes the warm Arctic/cold continents pattern, we'd all be well advised to batten down the hatches for winter. One way or the other, it's coming — albeit late.