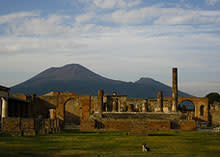 Mount Vesuvius, the mighty Italian volcano that destroyed the Roman city of Pompei, has been gradually transforming into a less menacing presence, according to a new study. Researchers studied rock samples from four different eruptions, from the Pompei disaster in 79 AD to the Pollena eruption in 472 AD, and determined the pressure and temperature conditions under which the rocks were formed; the results showed that the magma chamber had gradually shifted upward throughout the centuries. This makes eruptions less dangerous, researchers say, because magma at shallower depths is under less pressure. Researchers keep a careful eye on the towering volcano, for good reason. The blast in 79 AD

was so violent that it covered Pompeii in nearly 100 feet of ash. If Vesuvius erupted today, it could kill up to 700,000 people in southern Italy, including the residents of Naples [Scientific American].

The last eruption was in 1944, when lava flowed down the volcano's flanks and demolished several villages and military staging grounds. The study, published in the journal Nature [subscription required], showed that the magma chamber had shifted from five miles deep to two and half miles beneath the crust over the centuries in question, and researchers believe that trend has continued since then. Back in the days of Pompei, the conditions were particularly dangerous, says lead researcher Bruno Scaillet:

"The deeper the reservoir, the colder and the more viscous is the magma being stored," he said, explaining that such magmas "are prone to much more explosive eruptions when they reach the surface.... The difference in pressure depth between Pompeii and more recent eruptions [documented by] our experiments stresses that the next coming eruption may have little in common with that one which destroyed Pompeii," Scaillet said. [National Geographic News].

Scaillet hopes his findings will allow volcanologists to

build more accurate models to predict damage from future eruptions by factoring in the movement of these pools, he said.... Current technology does not allow scientists to tell where the pools are until after an eruption, which makes forecasts so important, Pichavant said [Reuters].