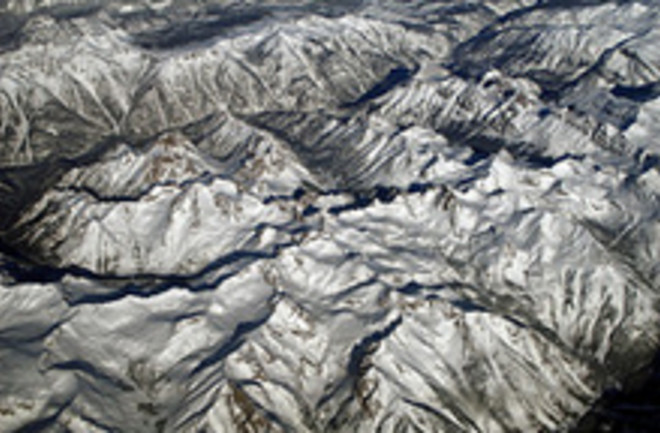 Fierce dust storms this spring have stained Colorado’s snow-covered peaks with brown, red, and pink dust, and state officials point out that this isn’t just a change in scenery. The darker snow is absorbing more radiation from the sun and is therefore melting faster and sooner than it normally would, which is upsetting the careful water rationing that defines life in the American West. Twelve dust storms barreled into the southern Rockies from the deserts of Arizona, Utah and New Mexico so far this year…. That, coupled with unseasonably warm temperatures, has sped up the runoff here, swelling rivers to near flood stage, threatening to make reservoirs overflow and fueling fears that there will not be enough water left for late-summer crops [Los Angeles Times].

In Colorado, melting snow accounts for about 80 percent of the water that flows through rivers and ends up in the state’s lakes and reservoirs. Colorado water engineer Scott Brinton explains that the early snowmelt could spell disaster for thousands of farmers and ranchers in the region who depend on slowly melting snow to provide water flows over the dry summer months…. “Those people who were relying on the mountain snowpack are going to have difficulty later in the year…. There’s not a whole lot we can do about it,” Brinton said. “We’re telling people, ‘You’ll be getting your water early this year, so use it while it lasts'” [Greenwire]. But scientists note that this may not be just a year of freak storms, it may be a harbinger of things to come.

Ever since settlers came to the West, dust has been on the rise. Grazing herds of cattle broke through the fragile crust of the desert soil, new developments raked away native plants that held the topsoil in place, and, more recently, off-road vehicles have churned up clouds of dust. Scientists say the amount of dust in the Rockies has increased five-fold since the late 1800s. But even without dust storms, forecasters predict that global warming will reduce the soil quality in the western United States to dust-bowl levels by 2050, said Jayne Belnap, a scientist with the U.S. Geological Survey…. “It’s just a harbinger of the future,” Belnap said of the dust storms. “This is the kind of world we need to imagine we’re going to be living in and decide if we can afford this dust” [Los Angeles Times].

Scientists are already experimenting with localized solutions. While some have called for restoring native grasses and other soil-stabilizing species across the region, such activities cannot occur so long as the soils continue to blow away…. Other options, including those aimed more directly at water supply, are to seed clouds with the hopes of increasing snow volumes in the high-elevation mountains [Greenwire]. But to truly reverse the trend, broader efforts are necessary: like offsetting developments with conservation efforts, and, on the global scale, reaching an agreement to slow global warming.