11:00 p.m. | Updates below, including photo of the tornado | Just when I thought I was done blogging for the day I spotted this Twitpic of a thunderstorm spawning a twister in Montana: 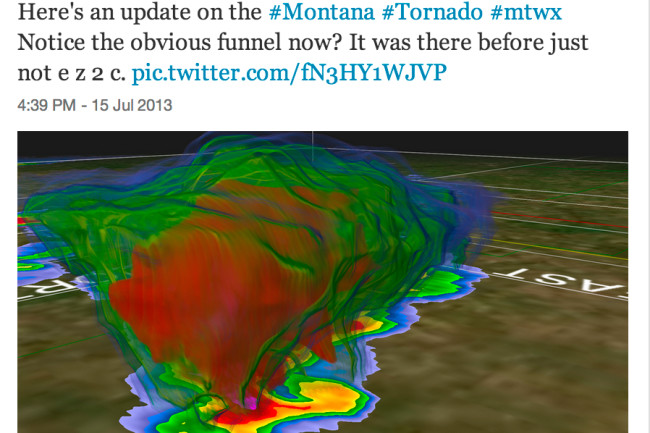 The image is amazing. It comes from a computer scientist and aspiring meteorologist named Jeff Adkins who helped me with my first post

of the day. That one was about the phenomenon of haboobs, or massive sandstorms, in the desert Southwest. Jeff helped out by supplying a spectacular visual much like the one above. So I now follow him on Twitter, where he posted this image. It's so dramatic that I just couldn't resist sharing it with you. Make sure to click on the picture for a bigger image. You're looking at a simulated 3-D view of a massive thunderstorm from which a tornado is touching down to the east of the town of Glasgow in eastern Montana. The image is based on NEXRAD radar data. 11:00 p.m. | Update: Here's a photo of the twister itself, also from Twitter: https://twitter.com/THESarahD29/status/356978464160612353 The area was, in fact, under a tornado warning from the National Weather Service. The image below shows the National Weather Service radar in Glasgow. Click on it for a larger version, and look for the boxes indicating tornado watch and warning areas. 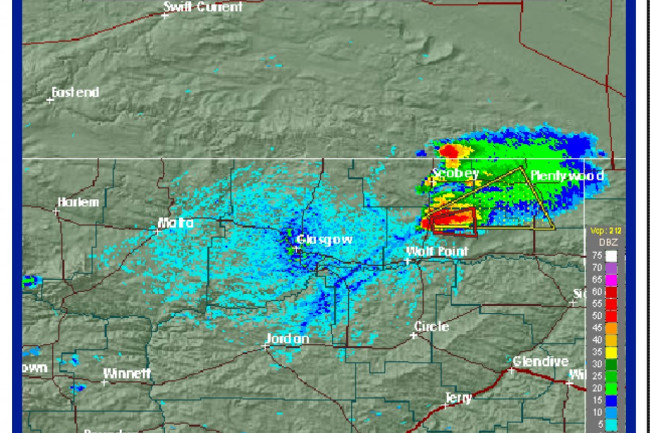 A radar image showing severe weather east of Glasgow, MT. (Image: National Weather Service) After spotting Jeff's Tweet, I immediately checked the latest GOES-13 weather satellite imagery and found what may be a supercell thunderstorm — the kind that can spawn tornadoes: 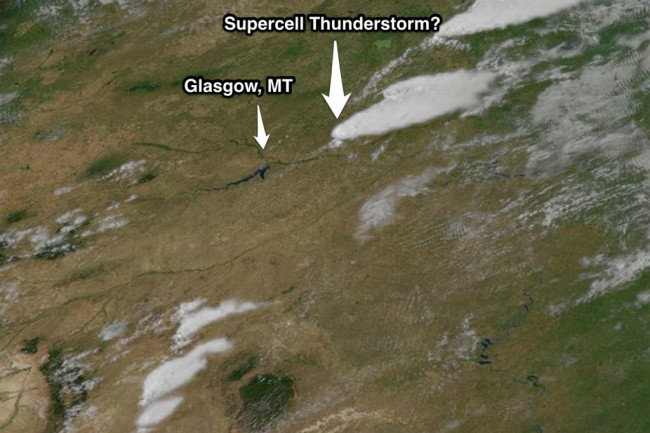 A large convective storm is blossoming over eastern Montana in this GOES-13 weather satellite image, captured at about 4 p.m. local time on Monday, July 15. (Image: GOES Project Science/NOAA/NASA) I'll keep my eye on this and report back with any additional developments.